An Unlikely Hero Emerges In The Newest Action Shortfilm From ShabyVideos, STALLED 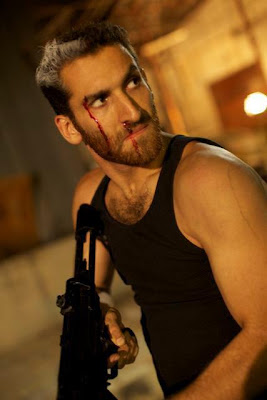 Fans of martial arts action and fans of TV shows like 24 will likely enjoy the latest new comedic action short, Stalled, from actor and filmmaker Shahaub Roudbari, formerly a member of U.S. and Iranian Wushu teams, and a film school graduate from the Academy Of Art in San Francisco. The piece sets up exactly the way it plays out on 24, during a moment of intense build up in real time between several screens as a small group of Asian would-be terrorists gather at an airport bathroom to assemble a bomb, except when they think they are alone, a man (Roudbari) walks out of one of the stalls flushing a toilet and sees what is happening. Being the only middle eastern man in the vicinity, he immediately realizes the consequences and what could happen to him if he is mistaken by the authorities, and decides to take off his shirt and tie and go John McClaine on their asses one by one.

Aside from the hilarious twist of this shortfilm, it points out some prevelant stereotypes about Middle Easterners and Muslims that still exists today. And to top off, we get to see a middle eastern action performer in the hero role in this comedic homage to all heroes who fight terror, and live for racial equality in a world that still sadly suffers from pockets of racial unrest throughout.
In trying to acquire some information about Stalled, I finally managed to reach Roudbari online, who highlighted the involvement of co-star, producer, martial arts stunt actor and long time friend, Eric Kim who went to Shahaub to help put the shortfilm together in order to help some fellow stunt performers earn their stripes and become SAG/AFTRA union members. In discussing the concept, Roudbari also says “When I saw the script concept (that Jaime David Silverman wrote) I fell in love with it and decided to make sure this film is done right. So, I called in my good and talented film buddies to help out (with sound, vfx, music, etc.) and voila, Stalled came about.”

I also managed to exchange some dialogue with one of the performers, Edward Kahana Jr. who is also one of the members of the premier martial arts stunt team, The Stunt People, and also provided cinematopgraphy work on the short piece. He credits Roudbari for promoting a compromisory demeanor and a “positive vibe” throughout the shoot, saying “Working with Shahaub was a great experience. He showed great patience and remained calm and focused when time pressures arose.”

In ceremonious fashion, Stalled marks the launch of Roudbari’s new YouTube channel “ShabyVideos” where he will continue to showcase even more spectacular screenfighting action in the weeks and months ahead. So feel free to subscribe to the channel after you view the shortfilm below.

The New International Trailer For Kick-Ass 2 Is Online SYNDICATE HYPE: A Word Or Two About Fast And Furious 7