BANG BANG!: Full Of Fireworks And Quirky Romance Anytime Of The Day 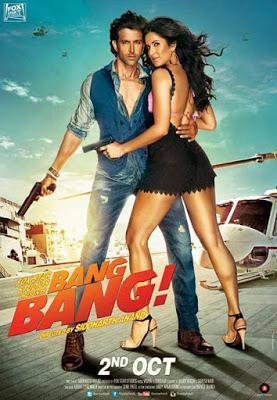 Director James Mangold’s 2010 action spy romcom, Knight & Day, was nothing special when I went to see it, but it nonetheless guaranteed a considerably good time at the movies. Tom Cruise and Cameron Diaz worked awesomely together in the story formatted from Patrick O’Neil’s script, and so to see it remade via Bollywood, while nothing new in this day and age, still drew my curiousity. Hence, Siddharth Anand‘s 2014 adaptation, Bang Bang! arrived, and it’s actually my first dig at a film like this from an Indian production, music videos and all.

The film takes its cues from its 2010 predecessor here with actress Katrina Kaif as the meek and stoic Harleen, dealing day-in and day-out with the woes of being a lovelorn and single bank receptionist. Following this, she desperately arranges an online date at a restaurant in order to find true love, and instead, greets a man she mistakes for her date, and just moments later, a chance moment of romance veers into a series of life-and-death decision-making situations; Rajveer, played by Krrish franchise star, actor Hrithik Roshan, is an international criminal wanted in connection with the theft of the Kohinoor, a priceless Indian jewel from London, one being sought after by the elusive terrorist, Omar Zafar, played by Danny Denzongpa, after escaping government captivity.
With the Kohinoor in Rajveer’s possession and both sides of the law hot on his tail, Harleen is unwittingly swept into a globetrotting cat and mouse game with Rajveer as her own means of protection, dodging bullets and often taking baddies out with them, much to Harleen’s chagrin. As their journey together progresses, Harleen struggles with questions of trust that weigh-in heavily on her unsure feelings about just who Rajveer is with relentless government official, Zorawar, played by Pawan Malhotra, in close pursuit. Soon enough though, Harleen’s own intuition brings her closer to unraveling the mysteries of Rajveer’s past, a move which not only draws her further in danger with the odds ever increasing, but at long last brings Rajveer closer to completing the true nature of his daring mission.
Being my first rodeo into Bollywood territory, I found myself enjoying this a lot more than I expected. The story is packed with a spectacular sweeping views of global locales headlines by a very charming on-screen romance between Roshan and Kaif along with their shared and respective musical numbers.
Much like the film’s numerous glam shots of sexy actress Kaif and a shirtless Roshan for good measure, the film wastes almost no time showcasing Denzongpa’s compelling performance as the film’s nefarious villain along with Javed Jaffrey opposite actor Jimmy Shergill‘s cameo, setting the tone just perfectly for the rest of the film. The principle action, while in its modest share of moments more sillier than others, was far more fantastic than expected, and delightfully performed by Roshan who reportedly trained immensely for his stunts, even upon overcoming an on-set injury prior to surgery to remove a blood clot from his head.
The film is well acted by its supporting cast, namely actress Kamlesh Gill in the key role of Dadi, Harleen’s grandmother. Herein lies the core of much of the story’s comedic impetus as it segways into Harleen’s rollercoaster romance and pantomime with Rajveer between the drama and action, all leading up to a dramatic and explosive finale that does a sure bit of justice to its earlier precursor from Mangold.
As far as the musical interludes are concerned, those didn’t bother me much. Point in fact, out of the two or three there were, my favorite song from the film is its first track, “Tu Meri” in which Rajveer initially romances his way into Harleen’s heart following a pertinent and intimate conversation about living each day like it was the last – a subtext that plays applicably well throughout the film. All in all, Bang Bang! was a blast for me and I recommend it to anyone who genuinely loves a good action movie musical.