Cam’s Eye Review: In Search Of A Cohesive Mummy

In a nutshell, this should have been a story of a girl who wanted power for herself and no one else. It would have made for a better story. Instead, we’re given a miasma of history from the introduction of the Knights Templar being buried with a stone from the hilt of an Ancient Egyptian dagger that was used in a magical ceremony by the Mummy herself (Sofia Boutella) and our cast of characters bent on its destruction.

We’re literally buried by story strand after strand beginning with Dr. Henry Jekyll (Russell Crowe) taking over a newly discovered crypt during an Underground expansion in London where he stumbles onto hieroglyphs above a Templar burial and encapsulating the story of Ahmanet, the daughter of a Pharoah and her glory to be a powerful ruler of Egypt. Through her own devices, she makes a magical plea with the underworld ruler, Set, to achieve her ends. It does not go well and the incantations were never completed. She is taken far away and buried alive after killing her father, the concubine, and the concubine’s son who was to inherit the throne.

Beginning the “Dark Universe” and being the alleged first of classic monster movies, Universal Pictures’s latest rendition of The Mummy fails to deliver actual scares and gives us literal “WTF” moments throughout. And these WTF moments are of the terrible variety, not the good variety.

The film goes from Medieval Times back to Modern, then to Ancient Egypt, then to Modern in too rushed a fashion. So how does this involve our main character, Nick Morton (Tom Cruise), an unsavory black marketeer, thief, and former Army soldier? Well, he steals a map from Jenny Halsey (Annabelle Wallis) so he can pillage a secret discovery underneath a village crawling with insurgents in Iraq. His best friend, Chris Vail (Jake Johnson), is loathe to go and doesn’t want to get killed. After Nick sabotages Chris’s water skin, he’s forced to go to the village and check out what’s what.
Of course, both characters are discovered and a firefight ensues and try running away, dodging bullets and not getting hit. Chris eventually calls in an air strike as they were supposed to stay away from the village and perform recon and gather intelligence. The airstrike uncovers a gaping Egyptian face beneath the sands but not before the insurgents are scared away from the missile impact. It is here that Jenny Wallis shows up as military operatives secure the village. Brutal verbal exchanges from Halsey and Morton were tired and boring and inferred a stormy relationship between the two. The attempt at candor and humor is wasted when wittier dialogue could have saved this film — but what do you expect from writers David Koepp, Christopher McQuarrie, and Dylan Kussman? A line about “13 seconds” of emotional content.

When Morton and Vail are given orders by Colonel Greenway (Courtney B. Vance) to investigate the deep open crater that exposed the Egyptian face with Halsey, she makes the eponymous discovery of Ahmanet after Morton shoots a line that raises a sarcophagus from a small lake of mercury. Then there’s this “psychic moment” when Ahmanet gets into Morton’s mind by choosing him as the new vessel of Set (as the one she chose back in Egypt was, I suppose, killed to prevent Set’s rising).

Film is a visual medium. I will give a little credit here that images should tell a story and drive a story along. But the connection between Morton and Ahmanet seemed forced and unconvincing and too fast to give a damn about these people and backstory. It’s stale and doesn’t take one specific stand to give us any real substance to work with. The entire film is a tired action-adventure template without the horrific element. A horde of large spiders appears to try to drive the story along and as Morton and Halsey fight to escape the creatures, Vail gets bit by one.

As the sarcophagus is hauled onto an aircraft, there is a huge sandstorm in the distance. As the plane takes off, it drives straight into a huge flock of ravens — which is odd because according to Egyptians, ravens were more of a beneficial omen, not of death. That was my first WTF moment. The second WTF moment was the height of the raven swarm. I am aware of some flocks that go from 22,000 up to 35,000 feet in some cases. But this brings the plane down but not before Vail allegedly dies and comes back to life as a zombie that Morton kills using the Colonel’s revolver. Morton hastily puts a parachute on Halsey and sends her on her way as the plane falls apart.

The next WTF moments happen along the way like Morton waking up in a London morgue, without a scratch, and Ahmanet on the warpath through the streets of London to retrieve the dagger that was taken from her. Then Morton meets Halsey’s employer, Dr. Jekyll, then he turns into Edward Hyde and fights Morton. There’s no rhyme or reason here to throw away a lot of useless shots that never pays off. And when Halsey is trying to convince Morton of his inner goodness, that takes a complete 180 of what her character’s focus was supposed to be on in the first place: to stop Ahmanet and her path to power.

The strands of story are like bandages falling away from the Mummy herself. It sadly attempts to put both Halsey and Morton together that Stephen Sommers’s The Mummy did with Brendan Fraser and Rachel Weisz’s characters without the obligatory spark of fun and wonder in the pairing. And there is, during the fight with Mr. Hyde, an easter egg showing The Book Of The Dead from the 1999 movie. Look for that. It kind of made me smile and grimace at the same time. 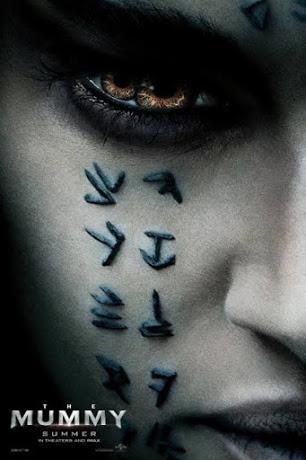 Director Alex Kurtzman throws this version in as the first in producing the Dark Universe. He is also at the helm of Van Helsing, The Invisible Man, and Bride of Frankenstein. The Mummy lacks a cohesive script and tight story which left me shaking my head at the most inopportune moments where it should have had proper scares. Even an ambulance getaway gave me yet another WTF moment as reanimated corpses kept coming out of nowhere on the vehicle to attack Halsey and Morton. It made absolutely no sense that Ahmanet “knew” where the knife was (holed up in an old church) as well as the red stone. And no “psychic” mind-meld is a logical explanation for this dishearteningly disappointing movie.

More fight scenes throughout the end shows a bit of a twist where Morton’s character was concerned after Halsey dies after a drowning. The pair was not convincing as a romantic couple and I was a bit nonplussed at the twist and eventual ending of the movie. I walked away quite conflicted. But my takeaway was that it was a mess and was 20 minutes too long. It was long on action and spectacle and short on story, plot, and genuine scares.