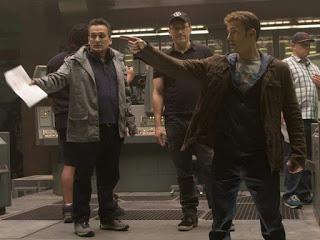 It must be great to be a Russo these days – specifically either Anthony or Joe Russo who are currently reaping the rewards of their efforts over at Marvel this month with Captain America: Civil War. Their momentum has since given them leeway to spark conversations with fellow film industry types in China following the establishment of their own production banner, Anthem & Song, and such conversations have now granted them a slew of projects they’re making public one day at a time.
Their latest, however, is now being reported in the form of the development of a Chinese superhero franchise, according to THR. The Russos will co-produce the franchise tentatively titled A Hero’s Awakening (英雄觉醒) with Beijing FangJin Visual Media Culture Communication Company with the latter wholly financing with later investors to be determined in due time along with a budget.
per THR:

“It is fair to say that the Russos are regarded as heroes in the global film business,” FangJin CEO Li Xing tells THR from Beijing. “In the future, everyone will be focused on the China market. By working with the Russos, we want to use the best visual storytelling to make localized films that fit the Chinese market.”

A script is still in the works as the start of a trilogy with the Russos’ spearheading efforts to line up an all-Asian cast and Asian lead. Following his Chinese directorial debut with the February release of Demon Warrior, filmmaker Mushui Feng will join concept artist Anthony Leonardi III, (Game Of Thrones, Disney’s The Jungle Book, Kong: Skull Island) to co-direct A Hero’s Awakening while official story and plot details, and a release date remain pending.
The Russos’ are also reportedly active on Wolf Warrior 2 in which Wu Jing will return to star and direct, as well as a Journey To The West-related project, and a sci-fi property. Also on their syllabus is an untiled pot comedy for Showtime Network, and crime series The Mastermind with Getaway Productions and Skybound Entertainment.