Check Out The Kickass Monekymaker Sisters In The New Shortfilm Trailer For BEHIND EVERY GREAT MAN!

LOGAN THE WOLF: The Action Team Behind ‘The Witcher’ Teases ‘Ultraviolent’ Fan Short With BTS Stills

Check Out The Kickass Monekymaker Sisters In The New Shortfilm Trailer For BEHIND EVERY GREAT MAN! 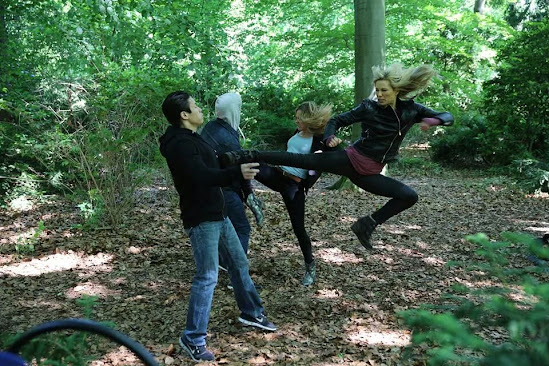 Action films are awesome to watch, especially if the performances are done by trained stunt professionals who know how to act. The case is often made on this site as a platform for stunt professionals who can creating high quality action content, including the professionals over at California-based film and stunt training facility 87 Eleven Action Design who are back to do just that with their newest shortfilm, Behind Every Great Man.

Front and center are two of Hollywood’s most respected stuntwomen, sisters Renae and Heidi Moneymaker, who filmed the project about a month or so ago on location in Germany with select members of native martial arts stunt team, Real Deal Action – Can Aydin, Cha-Lee Yoon and Phong Giang. The project is also one of a few that are on the way in the next few weeks with the notable participation of Hollywood stuntman, lensman and Reel Kick indie action purveyor, Sam Hargrave.
Between now and then while Behind Every Great Man remains in post-production, the latter Moneymaker is currently hosting its trailer exclusively on her YouTube channel where you may also subscribe. And while there isn’t much of a plot to go on here, once you press play, it probably won’t even matter. Why? Because action movies are awesome, and your argument is invalid. So there.
By the way, 87Eleven and Reel Deal Action have their own websites, and I’m pretty sure you know what to about that. 😉