Now On Tubi: Ranjeet Marwa’s EXILED: THE CHOSEN ONES Begs You To Be Put Out Of Your Misery

ADIPURUSH: Prabhas Soars In A Mighty New Trailer For The Latest Indian Epic Coming In January

1987: BLOOD OF THE BAT Dares To Unleash Its Fangs On Gotham!

MANIFEST WEST: A Family Defends A Mountainous Homefront In The Official Trailer

Coming To Hi-YAH! In October: THE DEBT COLLECTOR, THE DRAGON TAMER, THE MIRACLE FIGHTERS And More!

Lee Jung-Jae And Jung Woo-Sung Are On The HUNT In The Official U.S. Trailer! 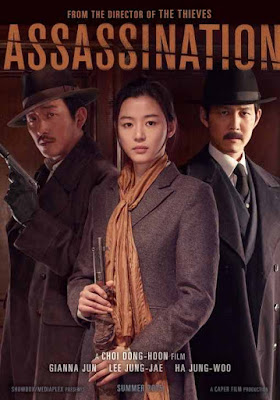 Director Choi Dong-hoon‘s new period espionage thriller, Assassination, is getting a leg up this week with new character posters which you may view at the bottom of the page. The film is poised for a release in South Korea this July while the promotional campaign rolls on with its fair share of the usual trailers and featurettes, and other gems pertaining to the new movie which reunites Choi with a handful of notable actors.
As for the film’s exposure elsewhere, it is only a matter of time before audiences abroad get to check out the film for themselves, especially for North America and Canada where Well Go USA continues to provide a sure service for Asian movie fans stateside. And as such, Assassination is getting a limited theatrical release on August 7, 2015 with locations pending.
SYNOPSIS:

Early 1900s Korea was under Japanese occupation and many Korean resistance activists were based in China, hiding from the Japanese authorities.The year 1933 in Shanghai, a command to covertly assassinate the Japanese Army’s commander is given to AHN Ok-yun, a top-notch sniper sentenced to death. For this task, YEM Sek-jin, an agent of the interim government extricates AHN Ok-yun and her comrades from the prison. But the grand plan is exposed to Japan by an internal spy and a hit man, Hawaii-Pistol is being hired to get rid of AHN. The assassination squad arrives in Korea without knowing hit-man’s chase. Can she make the impossible mission completed?

Actress Gianna Jun leads the cast with fellow The Thieves co-stars Lee Jung-Jae and Oh Dal-su, along with Kundo stars Ha Jung-Woo, Cho Jin-woong and Lee Kyoung-young.
Check out the latest character posters below along with a recent featurette (no English subs). And, in case you missed the latest trailer, it’s right here.