Actor and martial artist Darren Shahlavi is currently working on the latest reimagining of the 1989 martial arts drama, Kickboxer, for which the production just wrapped things up in New Orleans, Louisiana over the weekend with more to come. In the meantime, one other project harnessing curious onlookers is the forthcoming release of Riccardo Gabrielli R‘s live-action shortfilm take on the 7G Comics property, Zambo Dende, in which he plays one of the main villains, Pistol. Check it out below! 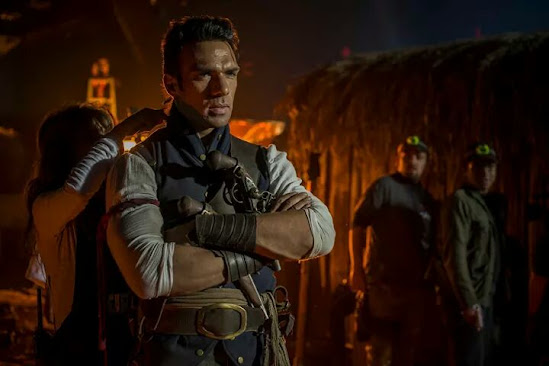 Based on the work of author and illustrator Nicolas Rodriguez, the story of Zambo Dende is set in 16th century Latin America where a child named Azuk, born into oppression, ultimately learns where his heroic destiny lies when he becomes of age. Action star Marko Zaror is tapped to play the title role, and the production is sure to keep teasing fans on a weekly or bi-weekly basis until we finally get to see Zaror in costume. For now though, this will do.

Shahlavi is also expected to appear in Ernie Barbarash’s Asian crime thriller, Pound Of Flesh next year as Zambo Dende prepares to take off. Zaror and Shahlavi are joined by actress Michelle Lee, and actors Esteban Cueto and Tait Fletcher. Check out the other character posters in the gallery below.

Special thanks to Samara Acosta Giraldo for the tip!