David Harbour Serves Up A Seasons Beatings In VIOLENT NIGHT

Christmas has certainly come early for film goers with “Violent Night” being released in the cinemas Worldwide. Produced by David Leitch’s stunt driven 87North Productions and distributed by Universal Pictures. Directed by Tommy Wirkola, Starring Stranger Things David Harbour as the big man in red and John Legiuzamo as the main antagonist aptly code named in the film Scrooge, supporting cast members are Beverly D’Angelo, Alex Hassell, Alexis Louder and someone to keep an eye out for Leah Brady who plays the sweet innocent girl who still believes in Santa. The official synopsis – When a group of mercenaries attack the estate of a wealthy family, Santa Claus must step in to save the day (and Christmas).

In the opening sequence you are introduced to a haggard old Santa at a bar drinking his sorrows away, while going off on a rant about how spoilt, selfish and irresponsible the children of this World are today. This Santa then makes a swift exit via the roof hatch and leaves a special gift for the bar lady, let’s just say you don’t want to be eating your dinner at this point in the film. We then get to meet members of the Lightstone family, a very wealthy and well connected family led by a cold blooded, stubborn, and hard nosed women “Gertrude Lightstone”, her opening scene gives you many laughs when she sticks it to the a USA Senator on the phone. You quickly realise the family dynamics are cutthroat and everyone is out for themselves, very similar to the vibe received in Rian Johnson’s “Knives Out”. One character that stands out in this is a wannabe gangster, social media famous with no brains teenager Bert aka Bertrude named after his grandmother to suck up to her. Played by Alexander Elliot who hits the tone perfectly for teenagers of this day worried more about their followers than their real family and friends. The not so Jolly Santa arrives at the Lightstone complex and tucks into some handmade cookies, ditches the milk for bourbon and takes a ride in a massage chair. It is not long before we get to see our first sign of action with mercenary ring leader showing his face “Scrooge” and taking out the guard. The catering team now show their true reason for being at the house on Christmas Eve to invade the complex and steal 300 million dollars which is sitting downstairs in the personal vault. Gertrude confidently expects the mercenaries to fail with her extraction team of trained killers on their way to rescue the family, however Scrooge seems to know something that she doesn’t. Santa is woken from his nap on the massage chair to the sound of gunshots and he tries to make a swift exit before getting spotted by one of the mercenaries. Queue the first of many epic fight scenes that you come to expect and relish with any 87Eleven North production. We find out that Santa is a badass and can handle himself despite being unarmed he uses whatever is at his disposal to end the perpetrator. With a little luck and help from a large icicle light on the ground floor the mercenary meets his untimely demise in brutal fashion. With his reindeers flying home, Santa is on his own and starts to make a swift escape, however the love from a little girl Trudy pulls him back in 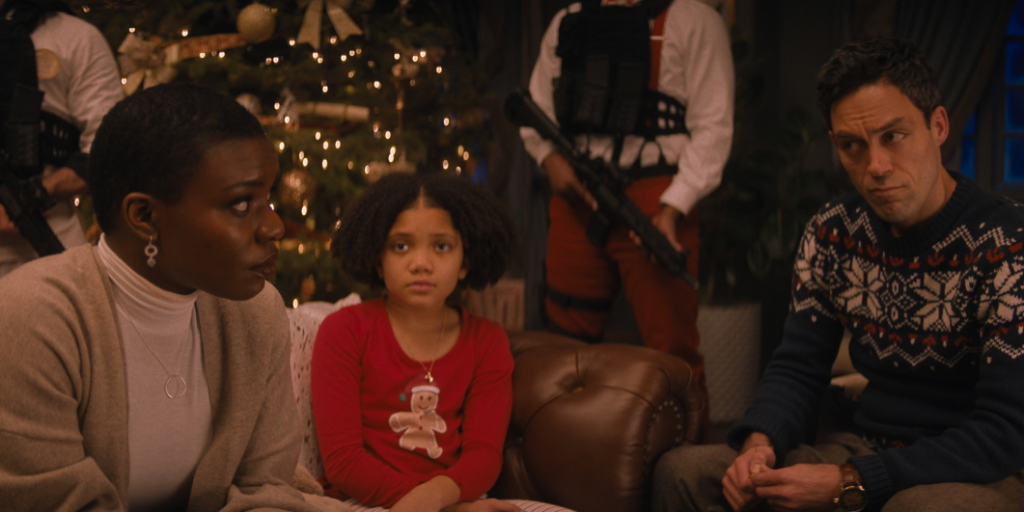 We are now treated to an interrogation sequence that brings a whole new meaning to the Christmas decoration the “Nutcracker”, lucky the threat is enough to lead Trudy to defend Santa’s honour leading to her getting away from your assailants and hiding in the attic. By Christmas Magic she was gifted a two way radio by her father which is now a direct line to Santa. Trudy who watched “Home Alone” for the first time on Christmas Eve Eve, asks Santa if she should put some booby traps out to protect herself, he gives her permission to do so just to make her feel like she is doing something to help, unbeknownst to him her traps do exactly that and some. For all your “Home Alone” fans out there we are treated to a real sequence which plays homage to original and best Christmas home evasion movie. Imagine nails, broken baubles, sticky glue and bowling bowls but used to inflict serious pain and leave gory results that make your squirm in your cinema seat. This sequence particularly left me and the audience laughing out loud. Now what sets this Movie apart from every other Christmas Santa themed film is that we get told a disturbing and violent backstory of Santa. In a previous life he was named “Nikamund the Red” a bloody thirsty Viking killer who wielded a hammer which he named “Skullcrusher”. 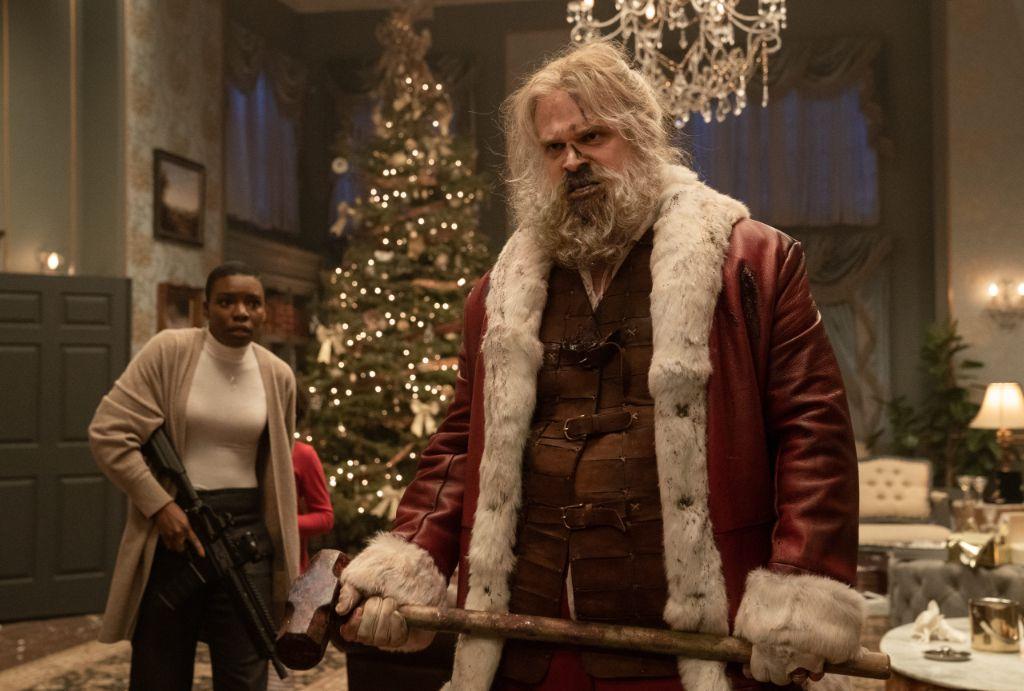 The extraction team have arrived however they aren’t there to save the day instead to join and help the mercenaries to get their big fat Christmas bonus. Santa hides out in a outbuilding and begins to be surrounded by these so called military trained personnel. This brings me to my favourite sequence of the entire movie. A 2 minute long montage of brutal killings by the hand of Santa. John Wick may have his Gun Fu but David Harbour’s Santa has Sledge Fu, he swings his sledge hammer with pure grace and intent that no mercenary could withstand. The array of every day items he uses in this sequence as weapons shows the creativity and originality from the fight choreographers and stunt coordinators. These include but not limited to a licked candy stick, star topper for a tree, tinsel, ice skates and even a snow blower. The final kill leaves a mans head pinned to the wall with his body slumped on the floor beneath it, not for the faint hearted nearly as much blood as the red wedding in GOT.

Throughout the entire movie one question keeps arising “Do you believe in Santa”, even Scrooge himself is torn between reality and his imagination. After his original plan goes belly up Scrooge starts to play dirty until he get’s his answer. This again is spoilt by the wealthy family, for the first time ever in their lives working together to save themselves and Christmas. Now no action Christmas movie would be complete without a snow mobile chase through a snow covered forest. Santa goes flying on a make shift sledge that knocks his attackers off their snow mobiles and into the white mounds of snow. This brings us to the final showdown Scrooge VS Santa, who will win? Well you can guess who does however how he does it is seriously in magical fashion as well as grim and disgusting.

Left wounded Santa calls upon the faith of the whole family to pull together and show they are nice people deep down. The final scene between Santa and his reindeer is sweet and loving as well as funny a perfect ending to a great Christmas film with a twist.

Overall this film delivered on everything I wanted from an action fuelled Christmas movie, for me it beat it’s predecessor last year’s “Fatman” starring Mel Gibson which had moments of greatness and some not so great. Every person who experienced this film with me in the cinema had a big smile on their faces throughout, with laughter filling the auditorium and possibly a few tears at the end.