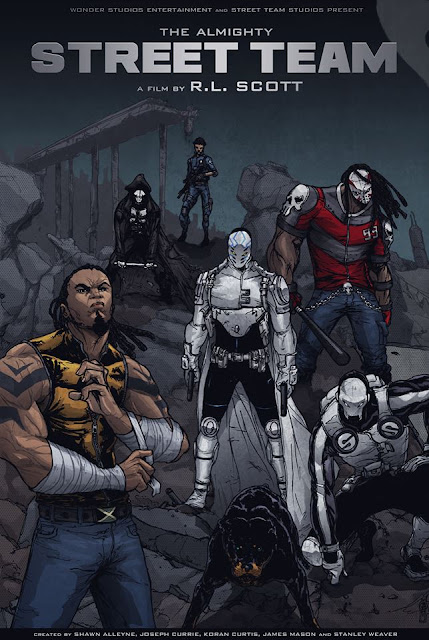 R.L. Scott, the director of the upcoming action crime thriller Call Me King is determined to make history for the world of superhero action movies with his next film, The Almighty Street Team. Today’s news with the unveiling the film’s announcement poster sets a milestone for Scott and his team at Shadow Motion Pictures, as it is their first film to be produced under their new banner, Wonder Studios Entertainment. Scott will also provide the screenplay for the film, based on original characters of the independently published comic book, created by Joe Currie, James Mason, Stanley Weaver, Shawn Alleyne and Koran Curtis.
As far as firsts go, Scott is very vocal about bringing filmgoers more African American faces to the big screen.Characters like Blade, Spawn, Mantis, actor Samuel L. Jackson‘s portrayal of Marvel’s S.H.I.E.L.D. Nick Fury and its relative mysterious television co-character played by J. August Richards, Marvel’s developing Black Panther and the upcoming Asian superhero film, Annhilator, are all non-White characters that have been brought to their respective fans in a live-action format. With “Street Team” however, Scott is taking the big leap forward in a groundbreaking attempt to bring movie goers their first-ever ensemble African American superhero team. Speaking on the importance of this latest endeavor, Scott says “I feel that as it stands, people of ethnic origin (African American, Asian, Latin American and so on) are not equally represented in the Superhero genre especially.” He then added, “The world is a richly diverse place and I feel like men, women and children of all nations and creeds should have more key heroes that represent them on a cultural level.”
Another addition to the unique qualities the film aspires to bring is the level of physicality and human talent that Scott believes will set “Street Team” apart from other superhero genre films of recent. “These characters are not super beings, they are vigilantes so their power comes from their elite fighting skills, technology and intelligence…”, Scott says. “Very much like Batman, but the level of action choreography in the movie will be above what you see in the average superhero movie or movies that rely heavily on CG effects in terms of the action.”
Scott is unable to publicly state any official casting info, as the film is still in development. However, he has expressed an interest in casting a very notable, physically capable actor to play the formidable supervillain, described as “a militaristic warlord with supreme martial arts skills and indestructible skin.”
Scott originally announced development of the film in the last week of May, officially announcing the start of Phase 1 on May 31, 2013, among a larger slate of other superhero film projects that will place heavy focus on characters of ethnic origin. These also include a god-like superhero called Prophet, and the recent acquisition to the rights of author Chuck Collins‘ independently published graphic novel, Dread Society X.
THE ALMIGHTY STREET TEAM is eyeing a production start for next summer. Scott’s new film, CALL ME KING, is slated for a late 2013 or early 2014 release.
QUESTION: Which big name action star of color would you cast as the main villain?

Jason Mewes Strikes Back With A Couple Of Killers In The New Webseries, VIGILANTE DIARIES Big Plans Are On The Way For Mexiplotation Revenge Shortfilm Thriller KISS OF VENGEANCE