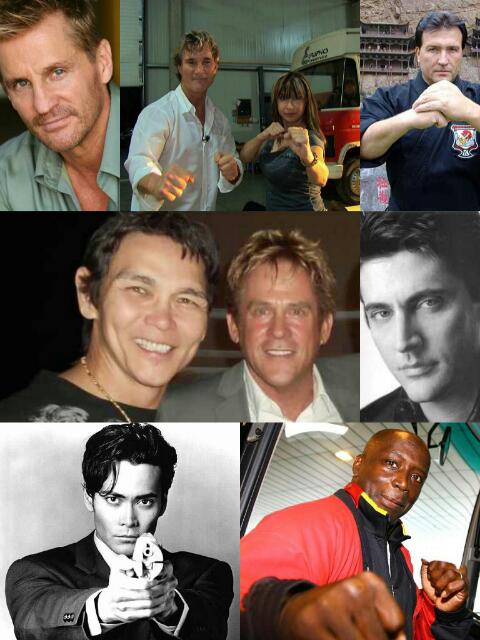 A recent report from Impact Online indicates that a B-movie take on the Hollywood blockbuster franchise, The Expendables, is pushing to hopefully begin production in Papua New Guinea soon. The news comes just several days after a quite conspicuous update shared on Kickboxing champion and action star Don “The Dragon” Wilson’s Facebook feed, suggesting an upward conversation recently took place between he and “American Ninja” himself, actor Michael Dudikoff.

“I spoke to Michael Dudikoff about working together on a project titled ‘The B Team’. He seemed very positive and I’d love to work with him since we’ve known each other for years and have even worked for the same directors and producers but never in the same film.

So there you have it. THE B-TEAM production is preparing to assemble its cast, namely to hopefully include Cynthia Rothrock, Jeff Speakman, Jerry Trimble, Billy Blanks, Mark Dacascos, Loren Avedon and Ricard Norton. And from the looks of it, the film is getting to look better and better, presenting a tasty listing of the who’s-who’s in all that made 80’s and 90’s theatrical and direct-to-video American and Hong Kong action films such great memories while growing up, reuniting some of these stars since such films as Bloodfist, Cyber Tracker, King Of The Kickboxers, China O’Brien and No Retreat, No Surrender 2: Raging Thunder. But as it stands, this particular casting news is still developing, so stay tuned for further updates.

Far from the excitement of Port Moresby in PNG, jettisoning skyward is the awe inspiring Volcanic Rim of Rabaul. This Ancient and beautiful place has an intriguing and tumultuous history. Deep in the jungle/forest near Rabaul’s base, a group of archeologist unearth a highly-developed, ancient civilization. Among the amazing relics found, a mysterious amulet is discovered that is believed to hold long forgotten technological secrets. Secrets that could threaten the welfare of the planet. This amulet had remained forever lost, until now.

When world powers learn of this discovery, rogue groups from around the world race to capture the amulet and its secrets. The amulet’s secrets would give the owner great power. The Prime Minister of PNG requests that the President of the United States send an elite team of Military operatives to return the amulet to its rightful place. Rising to the call for action, the President dispatches both an elite team and a backup team of action movie heroes (Don “The Dragon” Wilson, Cynthia Rothrock & more). They enter PNG under the guise of making an action film, when in reality; it is their mission to return the amulet. They are THE B-TEAM and this, is their story.

In order to keep up the facade that the B-TEAM Members Wilson, Rothrock and co are just shooting a movie, they bring their family members along as added cover. While the Team risks their lives; their families discover the extraordinary beauty and sites of PNG. Through various missions, chases, fights, streaks of good luck, streaks of bad luck and treks through the jungle (Shenanigans, etc.) The heroes get close to securing the amulet while appearing to be making a film. The elite team ends up serving as a distraction to the rouge groups, etc while the B-Team-ers make exceptional progress.

Wilson is currently also prepping for a K-1 match this fall, and is also slated to star in the upcoming film White Tiger, with actor and martial artist, Matt Mullins from Team Sideswipe, while Rothrock is helping to set up this year’s Legends Of The Martial Arts Mega Weekend in Pennsylvania this May with LOTMA Awards President, Master Eric Kovaleski. Dacascos is currently slated to appear in the upcoming second season as Kung Lao in Mortal Kombat: Legacy this Spring.