FANTASIA 2015: The Supernatural Looms In Feudal Japan In The Latest International Trailer For NINJA THE MONSTER 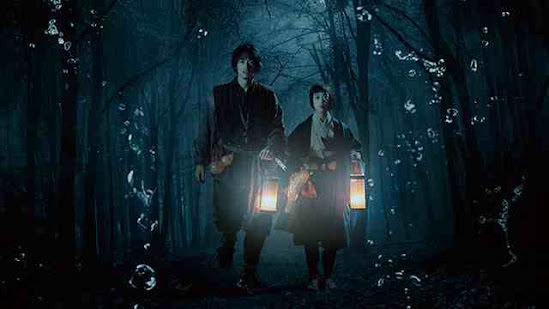 Acclaimed director Ochiai Ken is getting things off to a decorative start for this summer’s events at Fantasia Fest in Montreal. Part of the line up will be the August 2 premiere of his newest, Ninja The Monster – the second of two films well on the way from Shochiku’s forthcoming slate of low-budget cult-oriented genre titles from Japan, and judging by the most recent trailer, clearly Ochiai has nothing but good things in mind: ninjas, monsters, swordplay, fantasy. Consider me sold.

The time is midst of samurai era when Ninja were banned. Sachi, a beautiful princess is traveling to Edo (present Tokyo) with her men including Denzo who is an ex-ninja whose true background has been hidden. Suddenly, they encounter an unidentified monster in a forest. As they battle to kill the monster, all of Sachi’s men are killed except Denzo. Sachi starts to question his true identity and why Denzo risks his life to protect her.

Sure, it’s quite the switch from his latest 2014/2015 award-winning feat, Uzumasa Limelight, but that doesn’t mean this won’t be fun, and I’m sure it will be.

Fujioka Dean, Morikawa Aoi and Wada Sohkoh star. Hit up the festival website for premiere and ticket info and more after you view the trailer.

Ninja The Monster from Festival Fantasia on Vimeo.