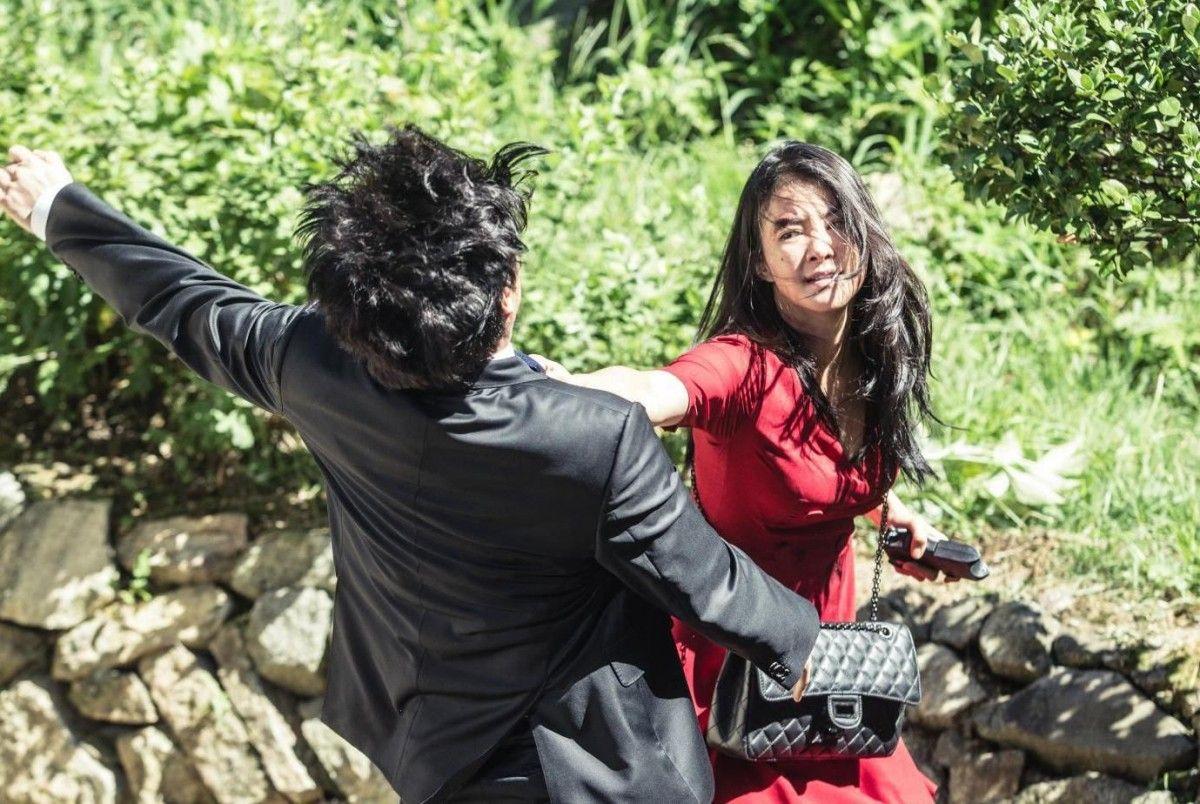 Actress Li Si-Young’s latest exposure to Western audiences now lies in Lim Kyoung-Tack’s feature debut, No Mercy, a film that instantly drew my attention last December even as it underwent its former title, “Older Sister”. To be frank, I’m actually keen on the film being titled “Sister”, as opposed to its current title in order to appeal more commercially to consumers – I get the reason for the change though there’s nothing major to complain about here.

What does matter is how the film sells itself from start to finish. We cut to a prelude of our heroine already behind the wheel of a car as she speeds to her next destination before confronting a mechanic, bareing the very image we see on the film’s official poster – the red dress, red heels and dragging a boss-level sledgehammer which she eventually hoists above the mechanic’s head before slammimg it down to the sound of flesh-and-bone getting smashed.

The moment is but a taste of things to come as the story commences with Inae (Si-Young), a former martial arts champion fresh out of prison – for reasons later discussed in the film – and back home with enthused welcome fervor by her special-needs sister, Eunhye (Park Se-Wan). Little does Inae know that life hasn’t been easy for Eunhye who, at this point in the story from what we’re shown, is consistently bullied and intimidated by other girls at school.

The following day as Inae sets out for job hunting, Eunhye is unable to escape her sadistic classmates who escort her to a karaoke bar that afternoon. The near-boundless depravity of her teen captors continues to reveal itself as the girls record themselves raping her on video, and coerce her to join their boyfriends who jailbait to ambush Johns, steal their wallets and score cash. In a move that would the turning point for Eunhye’s grim state, their busy night soon leads them to the wrong target, a gangster who decides to keep the girl captive.

Meanwhile, Inae decides to take matters into her own hands after waiting all afternoon and evening for Eunhye to come home and getting nowhere with the police, and eventually coming up just as short with Eunhye’s school officials. Thanks to a classmate who provides Inae her first lead, she sets out to find the girls and boys who were with her that night, and it isn’t long before Inae will have to put her foot down and show she means business.

Her relentless investigation soon leads her to a gangster named Ha (Lee Hyeong-Cheol) and a slithering pimp (Kim Won-Hae), before having to confront a small roster of creeps and seedy old men who know more than they’re willing to tell. Before she knows it, Inae will soon realize that rescuing her sister will ultimately mean having to finish what she started before landing in prison.

It’s pretty auspicious for Kyoung-Tack’s No Mercy to continue its festival shelflife as it has since screening at FilMart in Hong Kong and at Brussels in Spring. The film opened in South Korea back in January and would likely be acknowledged as a fitting candidate among the current pantheon of female-fronted action thrillers in recent memory if it got more proliferation among audiences with some reviews.

As for how it holds up, however, its story does play by a slightly more heart-rending set of rules. There’s definitely a “several parts Taken, other parts Unstoppable” feel to the narrative, though it’s less energized and more foreboding as the film plays out. Lee Si-Young is an absolute thrill to watch on-screen, carrying the role excellently with as much physical prowess and dramatic gravitas as needed.

The film does get a bit challenging to follow in the second half from a visual standpoint. I was left wondering if there was anything I was missing that needed some blanks filling, but the story does iron itself out some as you keep watching and not think too hard about the plot. It may not be enough, but it’ll keep you from guessing too much if it means you can enjoy the film a little more.

Si-Young’s heyday as a once amateur boxer speaks well to her physicality in this film. The action is less stylish than what we’ve seen in thrillers like Maria and Furie, and just a little more suited to Atomic Blonde with a somewhat scrappier look and just a little more editing. The action uses quick cuts from time to time and thankfully they don’t interfere too much, though it’s nice to see Kyoung-Tack go bold once in a while, actually pull the camera back and actually do a few single-take scenes along the way; There’s one cool action sequence involving Inae and other actor in which the camera pulls around from above the roof of a car and keeps going.

Kyoung-Tack and co-writer Kim Min tackle some pretty gruesome subject matter in No Mercy, and there are scenes in the film aimed at generating a more visceral reaction from viewers in this effort. Rest assured, things get intensely worse before they gets better and you especially have to credit Se-Wan for tackling such an emotionally arresting, intense and enduring role. As for Si-Young front and center, all that remains to be seen is how much it’ll be worth it to see our villains get pounded to a pulp. She’s a one-woman army and all the odds are against her in this harrowing tale, and that’s really the only starting point for rooting for her.

Lim has a ways to go before he can hold a candle to current directors in this genre, but he certifies himself well enough with No Mercy to be worth a mention in the conversation. It’s an otherwise watchable and exciting debut for the freshman filmmaker despite some jagged edges in its construction, and anchored no less by an actress who delivers a solid performance for its packaging. You’ll be cheering Lee Si-Young until the bloody, bareknuckle finish, and for that matter, one only wonders what she’ll look like under the stewardship of a director who can confidently make her look even better.

Come to think of it, I hope Ryoo Seung-Wan needs a strong female lead in another solid action thriller akin to the likes of Arahan or even The City Of Violence or Veteran. Lee Si-Young is the genuine article, and I will fight anyone who says different.

A Beginner’s Guide to DOCTOR WHO ARMY OF THE DEAD Now Filming, Adds Four More To The Cast