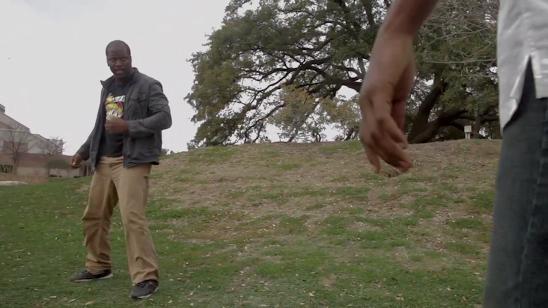 Well this little gem went over my head!

It was back in October of last year that I caught wind of independent filmmaker Jordan Kerfeld’s 2013 shortfilm fave, Tears At Dawn. It was my own introduction to Austin-based rising action star, actor Aaron D. Alexander, whose lifelong journey through martial arts and film have continually inspired him to be where he is today, an active, up-and-coming action director and performer on his own YouTube platform, Faux Fighting.
A purveyor of gymastics and several martial arts styles between the ages of four through twelve and in the years after, Alexander‘s path as an actor did not start until his college years beginning in 2001, eventually earning himself a degree in theatre, but always pursuing a career route toward filmmaking. Unfortunately, the indie action scene in Texas has been slow to grow. However, his career path did finally manage to gain some traction just a few years ago, and he has been moving forward with that momentum since then, with numerous projects – one of his latest being Show Down with fellow actor, action performer and B-boy Donald Brooks.
The latest installation, themed Not So Good Gentlemen, arrived this past April, and is the first of five themes expandingpanding through up to seven short episodes. And if this first episode is any indication, action fans can expect yet another pure, indie-driven labor of love showcasing crisp, solid and sleek fight choreography and stuntwork with two very talented young performers of today’s generation.
Come on Texas! As big as you say you are, these two dudes can use an audience. Make it happen!

Jason Momoa Could Be Playing AQUAMAN In BATMAN V. SUPERMAN…Just Sayin. Check Out The Full Trailer For REVENGE OF THE POMEGRANATE TREE HILL