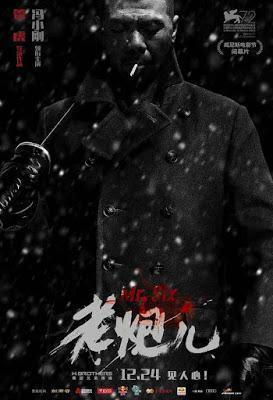 The past few months have been pretty ceremonial for filmmaker Feng Xiaogang in the wake of his latest debut lead role in Guan Hu‘s new gangster thriller, Mr. Six. The film has already made way in Toronto and Venice with a premise that introduces a look well beyond the “old vs. new” gangster theme, whilst still contributing a simple and entertaining story with Beijing suburbs as its backdrop.
Moreover, the added benefit of watching Feng in a role he truly grew onto upon reading grew onto should serve as a plus for fans after years of seeing him in smaller bit roles in films like True Legend, Kung Fu Hustle and his 1997 sophomore hit and 21st-annual Hundred Flowers “Best Feature” winner, The Dream Factory. Alas, we now welcome Mr. Six with a theatrical release set for December 24 for a title role that looks nothing short of badass by the first teaser with a second focused on Kris Wu‘s character as the son.
SYNOPSIS:

Mr. Six belongs to the old Mafia generation – one of principles, respect, and man-to-man knife fights. His estranged son Bobby belongs to the new generation – one of fast cars, clubs, and avoiding consequences. When Bobby is held hostage by a group of over-privileged punks for scratching their car, Mr. Six bails him out and attempts to rebuild their relationship, while ignoring his worsening heart condition. But when the powerful, political family of the gang’s leader seeks revenge and beats Bobby into a coma, Mr. Six decides to rally his old comrades and settle the score with one last battle.  Starring acclaimed director Feng Xiaogang, stepping in front of the camera for the first time, MR. SIX is a film with both heart and grit.

I SPIT ON YOUR GRAVE 3 Lands A Home Release Trailer JESSICA JONES Walked Into A Bar, And No One Laughed. Watch The New Teaser.