FROM DUSK TIL DAWN: THE SERIES Expands As A Netflix Original 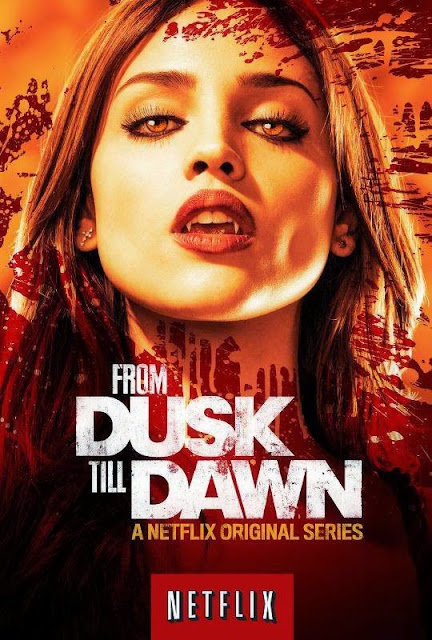 Multifaceted film director and cult cinema icon Robert Rodriguez continues his momentum this year with the forthcoming release of Sin City 2: A Dame To Kill For, and the diversified programming to be featured on his new television platform, El Rey Network, headlined by the March 11 airing of From Dusk Til Dawn: The Series. Time will tell if the new show proves to be a success as it takes a prequelized approach following the cult success of the 1996 feature thriller on which the show is based, while the network also ramps up efforts to assemble another exciting new action adventure series in the form of Matador, from executive producers Alex Kurtzman and Roberto Orci, and newly starring actor Gabriel Luna and actress Nicky Whelan.

In light of this, it seems that El Rey is ready to expand its horizons for its upcoming programming, and with on-demand platform Netflix now taking the reigns as a leading multinational provider of online and home entertainment, it appears that like Marvel, Miramax is now followng suit. And on that note, cue the press release:

Based on the cult-classic film of the same name, the series marks action auteur Robert Rodriguez’s first foray into serialized drama. New hour-long episodes of “From Dusk Till Dawn: A Netflix Original Series” will arrive weekly in Europe and Canada, within 24 hours of the U.S. broadcast. In Latin America, subsequent episodes will also be available on a weekly basis following the March 19 premiere.  In the U.S., the series premieres on Tuesday, March 11 at 9 PM ET/PT on El Rey Network.

Along the Mexico-US border, bank robber Seth Gecko (D.J. Cotrona) and his violent, unpredictable brother, Richard ‘Richie” Gecko (Zane Holtz) shoot their way south after a bank heist in Abilene, Texas. The 10-episode series takes place over the course of one night, following the brothers as they try to evade a pair of Texas rangers, Earl McGraw (Don Johnson) and Freddie Gonzalez (Jesse Garcia). Along the way, Seth and Richie encounter former pastor, Jacob Fuller (Robert Patrick) and his family. The Geckos take them hostage and steal their RV to cross the border. Chaos ensues when the group detours to a strip club populated by vampires. With the law, the undead and some of Mexico’s most hardened criminals on their trail, the group must fight until dawn to get out alive.

“We’re thrilled to premiere ‘From Dusk Till Dawn: A Netflix Original Series’ exclusively in our international markets,” said Ted Sarandos, Chief Content Officer at Netflix. “Robert Rodriguez is an amazing storyteller and we think our members will love his thrill-ride TV adaptation of the cult-classic.”

Robert Rodriguez, Chairman and Founder, El Rey Network, said: “I am excited about working with Netflix and Miramax to build an international audience for our series. This property has always resonated for viewers around the globe and we believe that it will be just as relevant for this new generation of fans.”

“Netflix is one of the most innovative and leading global entertainment platforms existing today and is an absolute perfect fit for Miramax, Rodriguez’s vanguard talent and this filmmaker-driven series,” added Zanne Devine, EVP, Production and Development, Miramax.