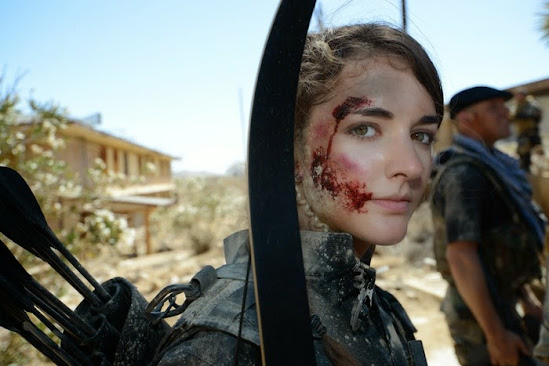 Fans and moviegoers alike are just five months away from Lionsgate’s forthcoming finale of the hit franchise, The Hunger Games: Mockingjay Part 2. If you feel that’s too long a waiting period, then you needn’t look further than the fanbase itself, where one of its own, multifaceted actress Kristen Brancaccio, whose own efforts have been brewing in well over a year now for the upcoming release of her latest fan-attributed short, Mockingjay: Burn, following a successful crowdfunding campaign earlier on.
Since then, a few updates have granted viewers some exhilarating footage with Brancaccio lending her iteration of screen heroine Katniss Everdeen to the battlefront with director Leo Kei Angelos at the helm. It’s nothing short of a stellar and fitting representation of its Hollywood counterpart and I’m hard-pressed to believe some folks at the studio weren’t the least bit impressed. Granted, the shortfilm itself is coming out this Tuesday, and we’ll all have some much more well-informed opinions by then.
For now though and with just hours left, Brancaccio updated fans with a video briefly explaining what took so long, with some interesting details included as well. Take a viewing, and follow suit!

New Trailer For NBC's BLINDSPOT Shows Jaimie Alexander, Inked-Up And Kicking Ass 'Lucy' Style Tortured Heroines Put Their Training To The Test In The Latest Trailer For INNOCENT LILLIES: THE END AND THE BEGINNING