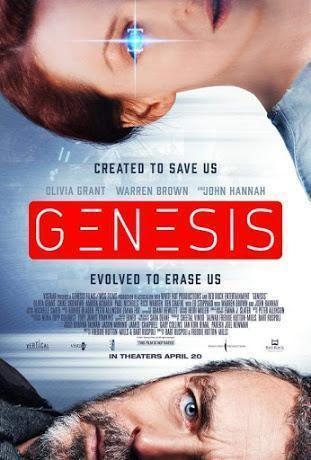 Film duo Freddie Hutton-Mills and Bart Ruspoli share a sizable list of writing and producing credits together with the latter spanning with his own notoriety as an actor. They also share the helm when filmmaking and their latest partnership brings some intriguing dystopian sci-fi thrills in Genesis, now hailing as the first of an ambitious new trilogy to come.

Deep in a subterranean silo, the last remnants of humanity is divided by a caste system that keeps the politicians and scientists away from the rabble and crowd.

While the civilians starve, freeze and are forced to work in a hazardous, chemically lethal environment above ground, all resources are dedicated to the construction of ABEL, a humanoid life-form designed to forage, search, recover and make contact with any other survivors.

Dr. Eve Gabriel, lead scientist, works with the huge burden of the fate of mankind on her soldiers. But when a civilian rebellion spills over into her lab and she is injured, Eve makes a shocking discovery. A discovery about herself, her mind and her fate…

Actress Olivia Grant stars as the beleaguered doctor central to the narrative and the film’s poster indeed hints at something more to her role, while much of the footage in the official trailer below peers intently into the mystery and danger that looms by way of the A.I. in question, played by Chiké Okonkwo. Also starring are John Hannah and Warren Brown with a limited theatrical and digital release now set for April 20 from Vertical.