GINTAMA: Beetlehunting, Swashbuckling, And A Battle For The Ages In Three New Promos For The Live-Action Adaptation 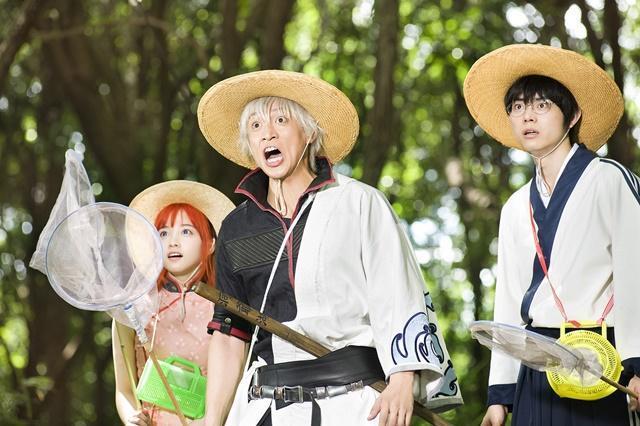 With a Japan release on July 14 in tow, Fukuda Yuichi’s latest live-action manga/anime treatment, Gintama, will be having its world premiere at Fantasia Festival in Montreal a day earlier. The film stars actor Oguri Shun who has become a personal favorite of mine in the last fifteen years or more since seeing him opposite Ueto Aya in Kitamura Ryuhei’s Azumi and in Miike Takashi’s Crows Zero and subsequent sequel.
Yes, I’m a fan, and not for nothing either with regards to Gintama; I first learned of this movie late last summer which eventually led me to start bingewatching all of well over 300 episodes (4 seasons) of the hit series and ultimately falling in love with the show overall. I still probably couldn’t give you every nook and cranny of what happens, but for the major arcs that occur in between, I would say there is plenty to build off of if sequels were to arise from this and especially considering the revelations that occur in the most recent anime series.
Surely enough, the new movie explores just the early beginnings of that legacy, as indicated in the newest trailer below. And if festival programmer Ariel Esteban Cayer has anything to say for it, anime fans will have plenty to endulge in when the film premieres.

In the last days of Edo, Japan as we know it was invaded by aliens. Samurai were forced to abandon their swords, but Gintoki “White Demon” Sakata (Shun Oguri, seen this year in MUSEUM) knew better than to give up swordsmanship entirely. Our hero still carries around a wooden sword, and alongside his loyal friends Shinpachi (Masaki Suda, of BATTLE OF SUPREME HIGH) and Kagura (Kanna Hashimoto of ASSASSINATION CLASSROOM: GRADUATION), has known many adventures and fought many battles. Tasked with retrieving a mysterious sword rumoured to absorb the soul of its victims, our beloved crew is now faced with a murder mystery… and a full-blown conspiracy to overthrow the government!

Fantasia favourite Yuichi Fukuda (I’LL GIVE IT MY ALL…TOMORROW; HK: FORBIDDEN SUPERHERO) is back, with his biggest manga adaptation yet: GINTAMA, in all its comedic, swashbuckling, fourth-wall-breaking glory! Fear not, our beloved comedy auteur has lost nothing of his unique comedic touch here. Quite the contrary – Hideaki Sorachi’s long-running, best-selling series provides the perfect material for Fukuda, who runs completely wild with its many sight gags, extravagant costumes, and crazy ideas! In fact, GINTAMA is refreshingly playful and self-aware, foregrounding its own silliness, like the book, and unafraid to take itself less than seriously, to wink, nudge and reference other influential series along the way (look out for Easter eggs)! A must for diehard fans of the book, and shonen more generally – this is a crash-course in live-action done absolutely right, and a blast from start to finish, whichever way you slice it!

It’s also worth noting that Well Go USA will be hosting the film’s presentation as well…which is really, and quite possibly, some of the best news anyone may hear considering how well-known they are for handling Asian releases to the U.S. and Canada; Well Go USA is also presenting recent acquisitions, Jung Byung-Gil’s highly-anticipated actioner, The Villainess and Bin Bunluerit’s martial arts period epic, Broken Sword Hero, making for a definitive package this year for Western audiences.
Frankly, I thought Funimation would have been doling this one out but I’m pretty pleased. At least Well Go USA’s handling gives Gintama a fighting chance for a limited theatrical release with multiple time slots should it be granted so. It’s what I would like anyway and I’m pretty certain I’m not alone there.
Among our larger cast are actors Okada Masaki as Kotaro Katsura and Domoto Tsuyoshi as Takasugi Shinsuke, both who get some screentime in the latest trailer below which comes with a few brief seconds of behind the scenes footage. Peep it below along with two new TV spots!