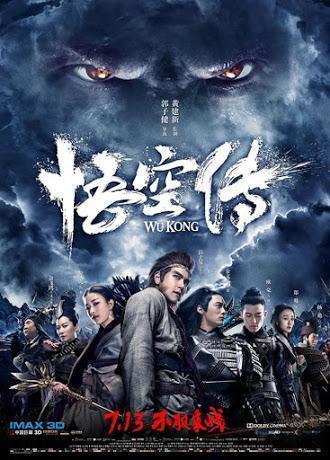 As far as I know, CMC Pictures may well still extend its July 13 release of director Derek Kwok’s latest fantasy epic, Wu Kong, into U.S. cinemas. I’m currently awaiting comment in that regard while it has otherwise been confirmed that the film will definitely see its day in Montreal for a North American premiere at Fantasia on July 18.

The trailers have certainly hinted at something pretty rather essential in the wake of so many adaptations of the character which have generally been geared toward family-friendly audiences. This one looks like its got some meat on its bones for sure and festival programmer Rupert Bottenberg expands with his own insight with the following summary per the Fantasia website:

Born atop the Flowers and Fruit Mountain, Wu Kong – the one who will become known as the Monkey King – has a heart of stone. The heavenly general Ji Hua is determined to destroy him, but the unusual little monkey is rescued by a wise monk, and his teaching begins. Meanwhile, a tangled web of romance, rivalry, and danger is spreading among the nobles of the heavenly realm…

A mythic figure since the Song Dynasty days a millennium ago, the mischievous, mystical Monkey King, Sun Wukong, is among the greatest and most beloved trickster heroes of world folklore. He counts immortality and multiplicity among his supernatural skills and powers, and surely it must be so given his countless appearances on page, stage and screen – from the 16th-century classic “Journey to the West” to the Beijing Opera, Chinese animation, Hong Kong TV series and in recent years, feature films featuring Jet Li, Stephen Chow and Donnie Yen. Derek Kwok (GALLANTS, FULL STRIKE) was co-writer/director of Chow’s 2013 effort, and now delivers his own distinct spin on the iconic super-simian. Rather than return yet again to “Journey to the West”, Kwok adapted the popular internet novel “Legend of Wukong” by Jin Hezai. A darker, edgier approach is taken, focusing on the early, formative days of Wukong (Eddie Peng, RISE OF THE LEGEND, TAI CHI HERO). With a cast including Shawn Yue (INFERNAL AFFAIRS, LOVE IN THE BUFF) and Ni Ni (FLOWERS OF WAR, WARRIORS GATE), and fantasy visuals as astounding as anything you’ve seen yet, Kwok’s WU KONG reveals a legend in a new light.

Peng is Shawn Yu, Ni Ni, Oho Ou and Zheng Shuang. A final trailer aired online a few days ago and you can view it below just above an international trailer from Fantasia Festival.

GINTAMA: Beetlehunting, Swashbuckling, And A Battle For The Ages In Three New Promos For The Live-Action Adaptation THE ADVENTURERS: Andy Lau And Jean Reno Square Off In The Latest Official Trailer