HARDCORE HENRY Gets An April 8 Release 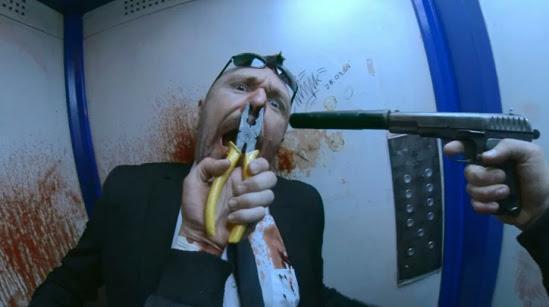 Following its ceremonious receival late last year at the Toronto International Film Festival and subsequent climatic rights acquisition by STX Entertainment, Ilya Naishuller’s newest thrilling actioner, Hardcore, has been re-titled as Hardcore Henry for an April 8 release. Deadline reports the film’s release date coincides with STX Entertainment’s release strategy to target college Spring breakers and 18-to-25 year olds alike with the company expected to launch a massive screening and promotional campaign between now and then.

You remember nothing. Mainly because you’ve just been brought back from the dead by your wife (Haley Bennett). She tells you that your name is Henry. Five minutes later, you are being shot at, your wife has been kidnapped, and you should probably go get her back. Who’s got her? His name’s Akan (Danila Kozlovsky); he’s a powerful warlord with an army of mercenaries, and a plan for world domination. You’re also in an unfamiliar city of Moscow, and everyone wants you dead. Everyone except for a mysterious British fellow called Jimmy (Sharlto Copley.) He may be on your side, but you aren’t sure. If you can survive the insanity, and solve the mystery, you might just discover your purpose and the truth behind your identity.

The retitling of the film is also apparently the result of the name’s attachment to another yet-known film. That said, this hasn’t fluxuated any enthusiasm on behalf of Naishuller, or STX for that matter.
“Hardcore Henry is one of the most original, adrenaline-filled movie-going experiences to be presented in theaters in a long, long time,” said Oren Aviv, president and chief content officer for STX Entertainment. “This film puts moviegoers into the story and experience in a fun and visceral new way with a first-person perspective that we really have not experienced before.”

Naishuller, who also wrote and produced the film, earned huge praise for his contribution to the 2013 viral hit music video, “Bad Motherfucker”, which essentially became the source of inspiration for the film’s development and partial crowdfunding a few years ago. He joins producers Inga Vainshtein Smith, Ekaterina Kononenko and Wanted helmer Timur Bekmambetov, with a cast rounded off by Andrey Dementyev, Dasha Charusha, and Sveta Ustinova.