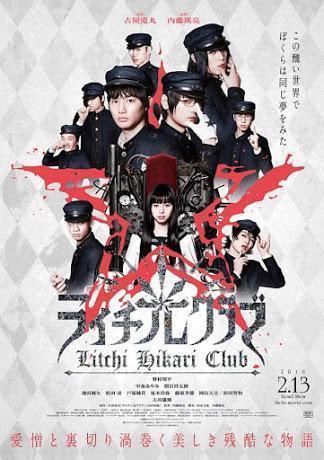 Manga author Furuya Usamaru’s 2006/2012 coming-of-age Ohta publication, Litchi Hikari Club is now a reality with a new feature adaptation courtesy of Nikkatsu. Teasers have since been making the rounds as of late last year and now we have a full trailer that invites us into The Crone and Puzzle helmer Naito Eisuke’s latest venture into grim horror comedy, replete with a look that ought to appease anyone with a taste for practical effects and immersive set pieces.
SYNOPSIS:

On the cusp of manhood lies madness.

The teenage boys of Hikari Club despise the adults of their community and have taken it upon themselves to eradicate what they perceive to be the evil and filth of the grown-up world. To accomplish this, they build a machine with artificial intelligence and dub it “Litchi”. However, with the boys on the cusp of puberty and turning into adults themselves, their own world has begun to collapse around them.

Watch the trailer ahead of its forthcoming February 13 local release in Japan.

S. Craig Zahler On Board To Helm BREAKING THE EMPIRE STATE The New Teaser Poster For RE:BORN Is Armed And Ready!