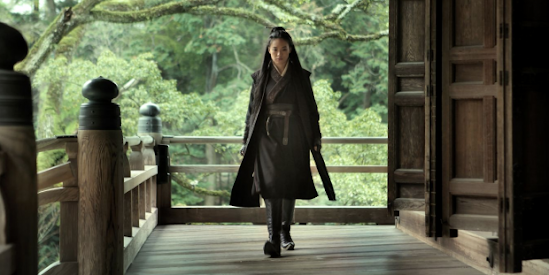 You know a film must be a huge deal when it’s up for the Palme d’Or, the highest award at the Cannes Film Festival. Events are set to kick-off this Wednesday as pre-sales are already underway as they have been for a flourishing number of titles, specifically Taiwanese director Hou Hsiao-Hsien‘s long-awaited wuxia drama production, The Assassin.

Well Go USA has reportedly nabbed the U.S. rights to the film which still awaits a release with actress Shu Qi starring based on work from the short story compilation, The Extensive Records Of The Taiping Era. Chang Chen and Ethan Ruan also join the cast and hopefully this all means we’ll finally see some footage go public whether before or after the film’s May 21 premiere.
SYNOPSIS:

9th century China. 10-year old general’s daughter Nie Yinniang is abducted by a nun who initiates her into the martial arts, transforming her into an exceptional assassin charged with eliminating cruel and corrupt local governors. Oneday, having failed in a task, she is sent back by her mistress to the land of her birth, with orders to kill the man to whom she was promised – a cousin who now leads the largest military region in North China. After 13 years of exile, the young woman must confront her parents, her memories and her long-repressed feelings. A slave to the orders of her mistress, Nie Yinniang must choose: sacrifice the man she loves or break forever with the sacred way of the righteous assassins.

Stay tuned for more info…and hopefully some footage to spare as well!

Tortured Heroines Put Their Training To The Test In The Latest Trailer For INNOCENT LILLIES: THE END AND THE BEGINNING Michael Jai White And Co. Update Fans On NEVER BACK DOWN 3