JANE GOT A GUN And She's Not Afraid To Use It In The New International Trailer! 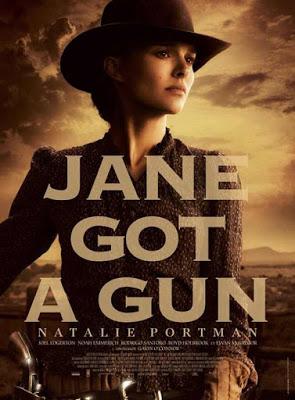 You would think that a film like Gavin O’Connor‘s latest, Jane Got A Gun would have an easier time getting a foothold. Alas, it took three years to start with were it not for director Lynne Ramsay totally bailing on the film altogether at the last minute, along with the revolving door turning of added cast.
Thankfully what we now have is a finished product, and what better way to deliver it other than with acclaimed actress Natalie Portman front and center? This, coupled with O’Connor reuniting with his Warrior co-lead, actor Joel Edgerton and actors Ewan McGregor and Noah Emmerich rounding out the cast, and what we get is… well, another reason why 2015 has been an otherwise great year for Westerns.
SYNOPSIS:

Young and pretty with a soul of pure steel, Jane Hammond (Natalie Portman) is a good girl married to one of the worst baddies in town. When her husband Bill (Noah Emmerich) turns against his own gang, the vicious Bishop Boys, and returns home barely alive with eight bullets in his back, Jane knows it’s time to ditch the dress for a pair of pants and strap on her own gun. As the relentless leader John Bishop (Ewan McGregor) gears up for revenge, Jane’s best hope for her family’s survival rests with her old love Dan Frost (Joel Edgerton) – a gunslinger whose hatred for Bill is only slightly overshadowed by his love for Jane. Together Jane and Dan spring clever traps, luring Bishop’s men to certain death just as their old feelings for each other resurface amidst the flying bullets.

Jane Got A Gun is getting a release in France next month followed by a North American release early next year. In the meantime, we finally have a trailer to compliment the last three frustrating years anyone’s ever had to work on a movie. Edgerton is the consumate actor ditching his native Aussie accent for a meaty Western frontier image next to Portman who clearly knows her way around a leading role as mighty as hers.
Western fans may dig this. Watch the trailer below.

KINGSMAN 2 Gets A Release Date! Drafthouse Announces THE WORLD OF KANAKO For U.S. Release This December