Japan Cuts Review: Kenji Iwaisawa’s ON-GAKU: OUR SOUND, Shows How To Find One

Kenji Iwaisawa’s animated manga adaptation, On-Gaku: Our Sound, takes a quirky, awkwardly comedic journey into the lives of a trio of delinquent high schoolers, Ota, Asakura, and their leader, Kenji. Their reputations precede them as a group to be feared, with Kenji heralded as the master of the spaghetti fist – really it doesn’t take much for Kenji to chase anyone away, apart from entering the room.

Kenji, for all intents and purposes however, is just a little more flippant and fickle than most folks read him as. He largely keeps to himself, and doesn’t pay much mind to anything unless he feels it’s important, kind of like when fellow girl student, Aya, warns him that a gang of mohawk-wearing students from a rival school have challenged him to a duel. He’s interested, intially, at least until some time passes, and soon enough, he’s not.

This pattern of behavior is soon tested the moment a good samaritan hands him his guitar case whilst in pursuit of a mugger. sparking a moment’s interest for Kenji the next day to start a band with Ota and Asakura. Neither of them have any musical experience or vocation, but that doesn’t impede them from hauling off as much as they can carry in instruments.

With an electric guitar, bass guitar and a two-piece drumset in hand, they march back to Kenji’s place and set up their room, ensuing an almost atonal rehearsal session with no vocals, and just the same rudimentary strumming and drum speed, and it’s a milestone accomplishment at first. Soon enough however, the issue of naming their band comes up, and their first choice is Kobijutsu, a name that already belongs to another trio, led by a guitarist named Morita.

After hearing each other play, both bands befriend each other whilst mutually operating individualy under the same incarnation of their name, and even partaking together to perform at an upcoming rock festival. As Kenji’s band resumes their usual rehearsals, however, Kenji suddenly decides he’s bored with playing music, leaving Ota and Asakura by themselves, and throwing his friendship with Aya in a tailspin. 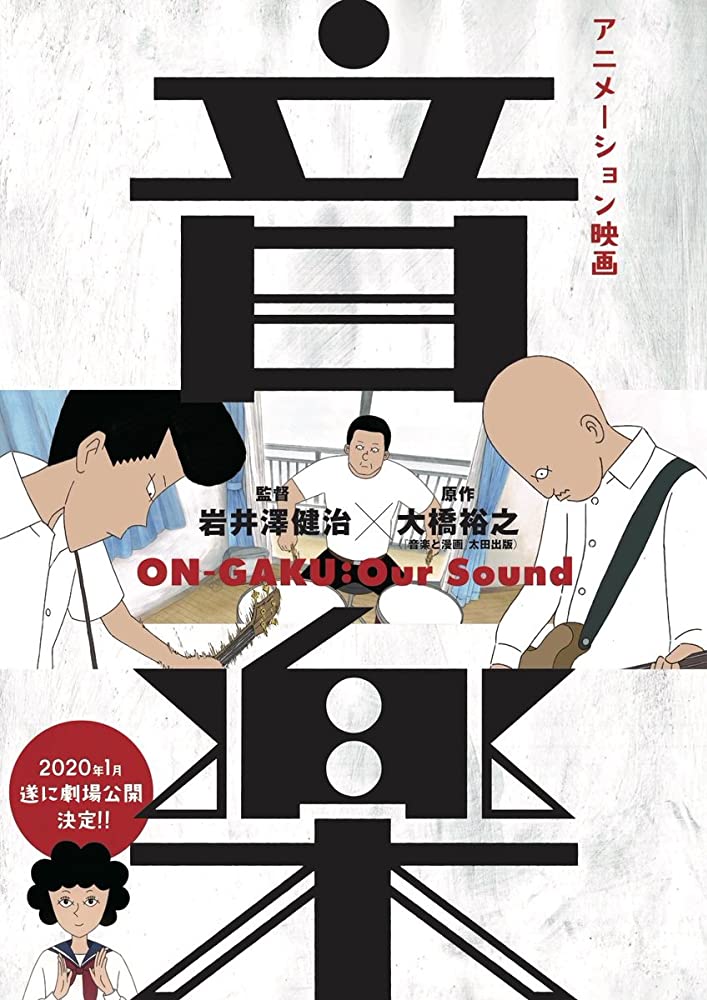 With a voice cast led by rock singer Shintaro Sakamoto, On-Gaku: Our Sound takes its cues from Hiroyuki Osashi’s cult manga, and happens to be the work of a seven-year effort by Iwaisawa who reportedly did most of the near-40,000 hand drawings for the film. The animation is simple, with vivid and impressive characterization, and isn’t afraid to take a transformative approach per the story’s progression, from the moment Kenji’s band starts playing, to when Morita’s own evolution and character development begins taking on its true form, oftentimes with vivid, psychedelic allure.

The film does have some hole-ish progression and doesn’t cover certain exact moments leading up to Kenji’s resolve by the third act, and so really you’re left to your own devices to figure out what makes him tick. For what it’s worth, it’s also a fair play for a story embarking on a story about teenagers who go through day-to-day complexities in trying to figure themselves out, and so really, it’s all about the music and how it pieces it altogether, which is the most beautiful and brilliant part of the film, in addition to its melding of concert-style cinematography for some of the final shots.

Indeed, if you love a good movie with a coming-of-age touch, and an unusual style of animation that catches the eye, then it’s easy to see what makes On-Gaku: Our Sound, such an award-winning feat. It’s got excellent instrumentation for its musical set pieces, an aberrant and visually thrilling artistic treatment that comes to life with every character development and plot transition, underdogs you can root for, an unflinching lead character who never lets up, and comedy that is purely exciting, energetic and youthful. But most importantly, it’s got a bangin’ musical finale that is sure to make your face melt.

On-Gaku: Our Sound is currently on track for a late 2020 release in North America from GKIDS.