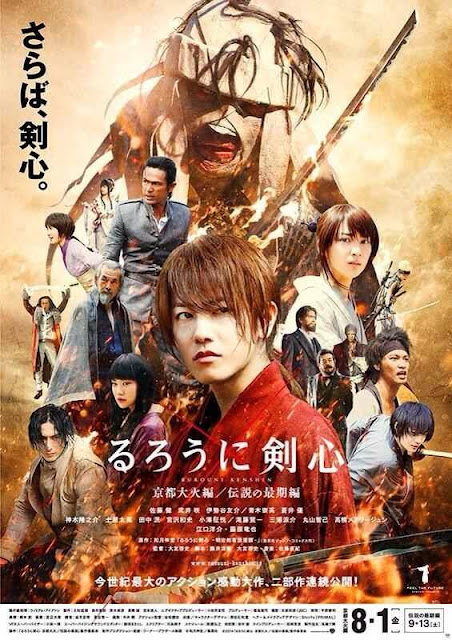 While Japanese households will catch actor Takeru Satoh on his latest gig in Fuji TV’s new action comedy series, Bitter Blood, the action will continue this summer on the big screen with the actor reprising his role once more in the sequel chambara thriller, Rurouni Kenshin: Kyoto Inferno as the unwitting samurai forced to pick up his sword and defend Japan against the “Jupponagata” (Ten Swords), led by a ruthless assassin, played by Tatsuya Fujiwara.

The film is the first of a two-part finale filmed back to back last year following the success of its successful 2012 predecessor, Rurouni Kenshin, based on Nobuhiro Watsuki’s original manga from Shueisha and directed by Keishi Otomo who helms the current film trilogy. And on Thursday after airing two teaser trailers, Warner Bros. Japan has aired the latest full trailer for the next film, including one with English subtitles that you can take a look at below.
Rurouni Kenshin: Kyoto Inferno, opens in Japan cinemas August 1, preceding the third movie, Rurouni Kenshin: The Legend Ends, which releases on September 13.

An assassin named Shishio Makoto was once contracted by the government, but has since become obsessed with tearing it down. In his previous adventure, Himura Kenshin was primarily concerned with protecting Kamiya Kaoru, but the stakes are now much higher as he struggles to protect the nation itself.