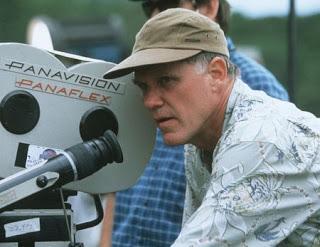 Captain America: The First Avenger Joe Johnston is the latest to begin benefitting from this week’s newly-announced setup at Qingdao Movie Metropolis complex in China. According to Deadline, his next film will be an action thriller titled Starfall from a script by David Coggeshall.

The film’s plot is reportedly underwraps but is said to take place on a space station. With the new movie studio stretching as far as 56,000 square feet of green screen space and a budget to the tune of a $100 million dollars, Starfall sounds just like the kind of project befitting of Johnston whose VFX credits date as far back as the first Star Wars trilogy, and directing credits which also include (but not limted to) The Rocketeer, Jumanji and Jurassic Park 3.
Chinese multinational conglomerate Wanda Group will be joined in co-financing Starfall along with Lionsgate and China Media Capital-backed Infinity Pictures whose own Dede Nickerson will produce with Lorenzo Di Bonaventura and Erik Howsam. Starfall is among a list of productions to be hosted at the new $8 billion dollar studio in China along with Legenday Pictures’s two other forthcoming prospects – Steven DeKnight’s Pacific Rim 2 with Universal Pictures and Godzilla 2 with Warner Bros.

Ted Geohegan's MOHAWK Is On The Hunt In A New Official Still Crime Thriller STINGRAY Lines Up Jon Bernthal To Star, Shooting In Spring 2017