Following up with his SXSW 2015 favorite, We Are Still Here, director Ted Geohegan’s latest thriller, Mohawk, is well underway in post production from Dark Sky Films and Snowfort Pictures. Filming wrapped about a month or so ago following its summer production in upstate New York and several pics have gone viral since then, and the latest, featuring actor Justin Rain, went online on Wednesday which you can view below.

Kaniehtiio Horn (Hemlock Grove, Blank Paige) stars in MOHAWK, an intense horror and action tale.  After one of her tribe sets an American soldiers’ camp ablaze, a young female Mohawk finds herself pursued by a ruthless band of renegades bent on revenge. Fleeing deep into the woods, Mohawk youths Oak and Calvin confront the bloodthirsty Colonel Holt and his soldiers. As the Americans seem to close in from all sides, the trio must summon every resource both real and supernatural as the brutal attack escalates.

Actress Horn and actor Rain are joined by the WWE’s Jon Huber (aka Luke Harper) and a cast that so far includes Noah Segan, Ian Colleti, Robert Longstreet, Sheri Foster and Ezra Buzzington with a script by Grady Hendrix. 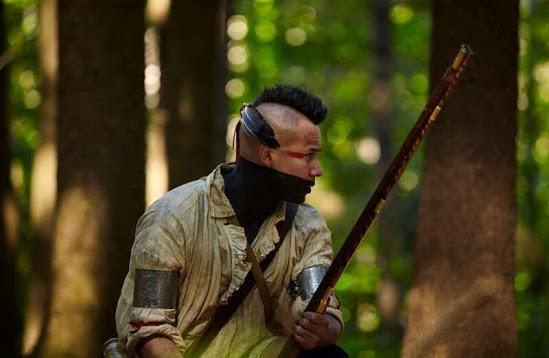 Get Ready For The LOGAN Trailer With A New Tease! Joe Johnston To Direct Big Budget Space Actioner, STARFALL In China