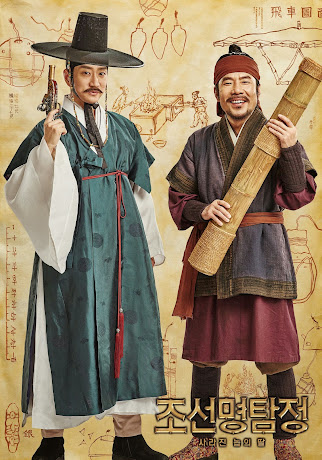 Despite however you may feel about movies based on books or other mediums, fans of Joseon-era action comedies have surely gotten a kick out of director Kim Suk-Yoon‘s 2011 whodunit flick, Detective K: Secret Of Virtuous Widow. Clearly it did well enough for itself having initally spawned from a 2007 publication by author Kim Tak-Hwan, and with interest in a sequel brings the return of lead actors Kim Myung-Min and Oh Dal-Su to reprise their roles from the first in the upcoming release of Detective K: The Laborer’s Daughter with award-winning actress Lee Yeon-Hee also starring.

“Detective K” is the greatest Joseon detective story ever told about a private eye who is part clumsy and part genius with slyness and wit as his weapon. In 1795, the nineteenth year of King Jeongjo’s reign, a large amount of fake silver is slipped into circulation creating a substantial threat to the economy. Detective Kim Min is assigned the task to investigate the crime ring behind the scheme. He goes undercover in a rural village with his best friend and sidekick, Seo-Pil. In the village, the pair meets a girl called Dahae who asks them to help her find her missing sister. Soon, Dahae goes missing, too, and discolored, bluish corpses of village girls begin to wash up on the shore. Kim Min discovers that these deaths are directly related to the manufacturing operation of counterfeit silver.

The film has a few working titles but is set to release in South Korea in a couple of months, and thankfully, there’s a teaser to accommodate our patience. Check it out just beneath and watch for more news ahead.

ROPE-A-DOPE 2 Gets An Online Date And Poster! THE GRANDMASTER 3D Re-Release Issues New Posters And A Trailer