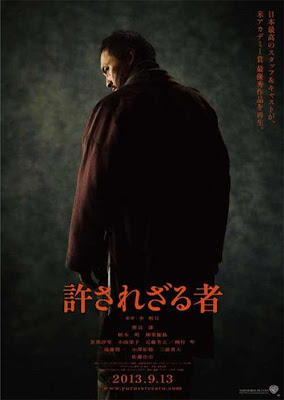 Director Sang-Il Lee‘s latest film, Unforgiven, is out with a new trailer this weekend, featuring actor Ken Watanabe as a 17th century former government assassin who is drawn back with a new assignment after his pursuit of a new life is stricken with tragedy and poverty. The film is a remake of the 1992 Western action drama of the same name, which starred and was directed by Clint Eastwood and won four Academy Awards, including Best Picture and Best Director.

The story is set in Hokkaido in 1880, a time of increased pioneering in the area after the fall of the Tokugawa shogunate. Ken Watanabe stars as a long-retired samurai named Jubee Kamata who is now living a quiet secluded life with his children.

Jubee was once a famous assassin in Kyoto who killed at the behest of the Edo government. After the decisive Battle of Hakodate, he slipped away and fled to the north to escape the new government. Ten years ago, he gave up his sword for his late wife, but poverty causes him to be lured out of retirement by a particularly large bounty.

Ryan Gosling Is A Very Dangerous Boy In The Final Trailer For ONLY GOD FORGIVES Film Of The Week: PACIFIC RIM (2013)