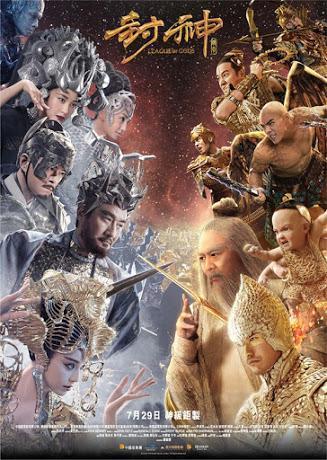 I suppose it’s a matter of time now before we learn of a wider release for Koan Hui’s latest, League Of Gods. The film opens in Asia this Friday and much to the avail of Jet Li fans despite his role unlikely being written for action. Still though, you get all the spectacle and majesty you could possibly want for as long as this film’s been developed as another milestone step forward for China’s growth into more VFX-heavy cinema.

An imaginary time zone parallel to the Shang Dynasty, 1000 BC: The kingdom is in trouble. The autocratic King Zhou (Tony Leung Ka Fai 梁家辉), entranced by his favourite concubine Daji (Fan Bingbing 范冰冰) who is a vixen spirit in disguise, oppresses the people and banishes all opposition. A band of rebellious warriors from the Ji clan unites allied forces to overthrow the tyrant. Amongst them is Ji Lei (Jacky Heung 向佐), an orphan of the Wing Tribe who was rescued as a child by the powerful Wizard Jiang (Jet Li 李连杰) on the fateful day of his Wing initiation into adulthood, when his parents were massacred by King Zhou. Haunted by his loss, Ji Lei is sent by the Wizard on a mission to seek the Sword of Light that will awaken the courage to spread his hidden wings and help restore balance to the world.

The final trailer recently aired and you can view it below as well, along with a fresh new music video by recording artist Jam Hsiao – PLUS, a spectacular new trailer courtesy of Distant Horizon.