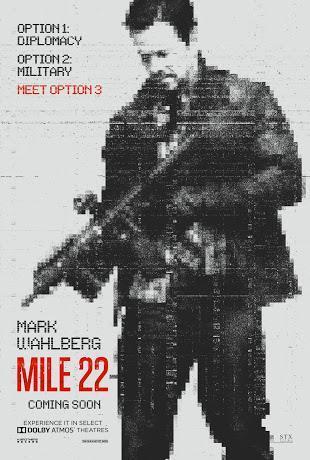 UFC champ-turned-actress and WWE star Ronda Rousey may have had a hell of an uphill climb in the last several years, but she’s proven her resilience along with her filmic potential since breaking out in 2014’s The Expendables 3. Her fruition also comes in parallel to the international success seen by actor and martial artist Iko Uwais (Beyond Skyline) since emerging in under the auspices of Gareth Huw Evans nearly a decade ago and flourishing toward a bigger career to date.

For this and apart from being a fan of the genre their talents are relatively attributed to, I couldn’t be more proud, nor excited for the upcoming theatrical release of STXfilms’ new franchise hopeful, Mile 22. Both aforementioned cast members join the committed actor/director partnership that is actor Mark Wahlberg and Peter Berg who are now five years-strong in their four-for-four collaboration that also bears the potential for a new franchise of its own, including sequels, TV and VR properties with STXsurreal.

In a visceral modern thriller from the director of Lone Survivor, Mark Wahlberg stars as James Silva, an operative of the CIA’s most highly-prized and least-understood unit. Aided by a top-secret tactical command team, Silva must retrieve and transport an asset who holds life-threatening information to Mile 22 for extraction before the enemy closes in.

A few I’ve engaged with on social media have cited low expectations for this movie. I can kind of understand why, though I’m also mindful of how awesome this particular project might become. Apart from being familiar with the prior work of its assistant fight choreographers who also perform in the film, I have a few friends who’ve worked on this and I’m well aware of their caliber in executing stunts in addition to Uwais who also serves in choreography along with fight coordinator Ryan Watson (Batman V. Superman: Dawn Of Justice, Serenity, V For Vendetta).

Shepherding this venture is Mark Wahlberg, a strong actor who obviously gels well with Berg as their comradery continually aims higher and longer. I explicitly hope their growth also expands to what lies ahead for Mile 22 and to be quite honest, as much as I loved The Raid and its brutal and bloody sequel, critical reviews of my own notwithstanding, I’m fully invested in seeing Uwais in another action franchise no matter what, and it would certainly be something to smile at next to Rousey and her own progression, and in whole, a new action franchise (not based on a pre-existing IP) with an added element of martial arts action fandom that we can all enjoy.
This hard-hitting cast is joined by Lauren Cohan and John Malkovich with a script storied and penned by Graham Roland and screenwriter Lea Carpenter.

Watch the first official teaser trailer below and share your thoughts in the comments section.