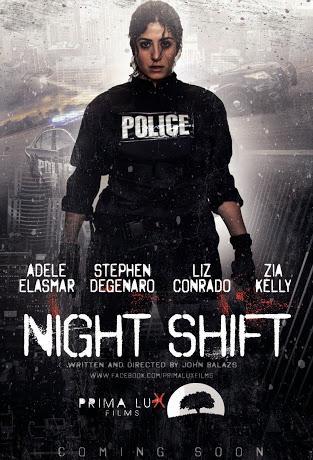 A few years into covering some of filmmaker Johnny Balazs’s activity behind a lens has turned up with some pretty exciting results at Prima Lux Films. For one, it aided my efforts in immersing myself into the work of a worthwhile director who has deservedly reaped his ample share of recognition; his multi-winning short, Dancer, embodies just small, but hefty morsel of what Balazs has been able to achieve with the help of a dedicated crew and limited means.

His latest, Night Shift, came with an effort toward fulfilling a crowdfunder that never met its goal, which is almost typical a challenge for crowdfunding a film project of almost any kind. And yet still, with the temerity and gumption of a true artist and creative, Balazs was somehow able to pull off achieving what was initially set to be a 20 minute proof-of-concept into a slightly longer show of skill and action-packed storytelling that further dares to challenge action fans to feast eyes on something new, original, and fresh with exciting potential.
Moreover, it’s not all the time that you find a project with an actress attached and who with nearly no screen-fighting skill or experience, still manages to ensue the desired results required. Leave that to actress Adele Elasmar who, after putting in the work and months of training with the film’s stunt team and fight choreographer Dan Stuart Ginnane, leads an almost Raid-stylized crime thriller that puts a resilient female role at the forefront of the action and drama.

A guilt ridden police officer is forced to tackle her inner demons and rely on her training to survive and fight her way through 5 floors of a drug lab.

An October online air date is forthcoming, while Balazs retains some plans of his own before then. I’m thinking festivals, but you’ll only find out by following along at his official Facebook page. It’s packed with gems from the new action thriller short including stills, and the latest teaser you can now check out below with Stephen Degenaro, Liz Conrado and Zia Kelly also starring.

AX 2018: A Live-Action GUNDAM Movie Is Actually Happening! No…Not The Fake One You’ve Been Reading About… THIS ONE! GINTAMA 2: Get A Look At Who’s Who In The First Official Poster For The Sequel!