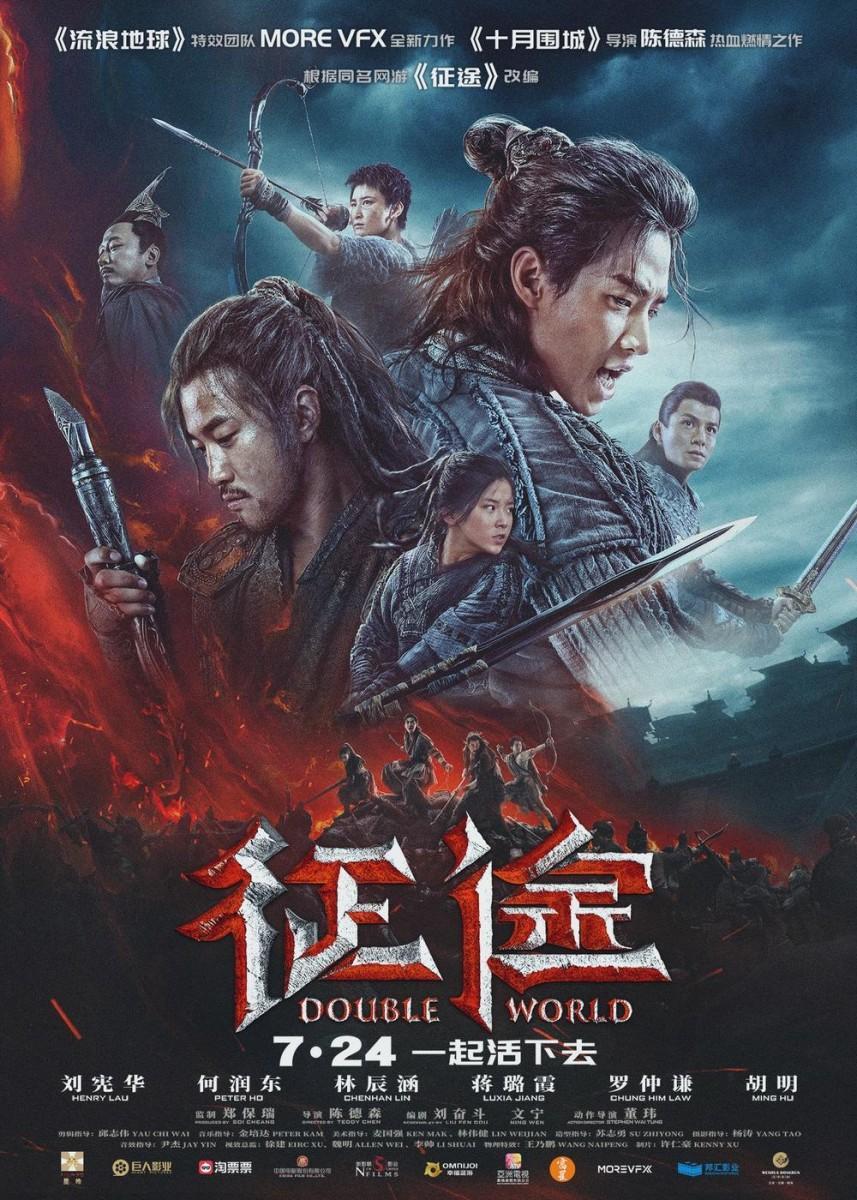 In a single instant in Teddy Chan’s Double World, an assassination attempt uproots ten years of peace between two kingdoms, the Northern Yan and Southern Zhao. Both lands are now faced with the looming threat of war, and so the kingdom of Southern Zhao initiates a competition in Phoenix City for eight clans from various villages to compete with their skills as warriors.

One such team hands over a ragtag trio in the form of Dong Yilong (Henry Lau), a young, wayward thief and village troublemaker with a noble heart and a natural instinct to help his fellow man, Chu Hun (Peter Ho), a disgraced soldier once accused of deserting his unit, and Jinggang (Lin Chen Han), a beautiful warrioresses who is as quick with her sleight of hand as she is with her massive sword. Once at the city, they soon find themselves in the company of Bi Nu, a Northern Yan slave girl forced to fight for scraps as she’s haphazardly auctioned off to Chu Hun.

The competition is as fierce and as deadly as it gets in Phoenix City with each clan forced to take on each other, including through a series of harrowing booby-trapped arenas, a cave with a ferocious armored beast. For Yilong and the rest, save for Nu, they all have their reasons for being in the competition. Still however, it’s not the prize that will culminate their victory, but their journey together as they each come to terms with their tragic pasts, and find common ground despite their varying backgrounds in the looming fog of treachery and war, and a spy in their midst.

Arriving in time for the 15th anniversary of the online game that precedes his film, Chan manages to bring out some impressive blockbuster feats for Double World which surely aim to impress. Plot development takes some interesting turns for our characters throughout the story, and indeed there are a few characters in this film that will not only charm your way into their hearts, but also perish in seperate scenes, which is pretty disappointing; One such character gets paid tribute in the end with a megastatue etched and chisled in their likeness, and it’s an ending that seems managed well enough to be decent. Still, it feels like more could have been done, and simply wasn’t.

Among main trio of characters, Peter Ho’s Chu Hun is the most explosive, whose character wields a staff with a broken spear tip. He’s exponential with it whenever the time comes to throw down, from fending off hordes of henchmen, to slaying vicious man-eating desert creatures. Lin’s Jinggang is basically just as perky and optimistic in her youth as is the role of Dong, who, proves himself in physicality beyond using a grappling hook.

With Hun, there’s definitely a backstory that intrigues a little more with a certain connection to that of Jiang Luxia’s Bi Nu. Luxia is really the only other female actress in the film, and though there’s a certain minimal treatment to her character and screentime, she makes the absolute best of it on camera. She’s become one of the fiercest action stars of today’s generation, and as long as it’s been since Coweb and Fatal Move (a.k.a. King Of Triads), she bares a performance caliber that demands another lead role in a great film that can’t come soon enough. This is as both actress and screenfighter, a rewarding treat for action fans with scenes coordinated by Stephen Tung.

While some of the visual effects in Double World can be hit-or-miss at times, the film delivers a well-crafted, emotive and compelling adventure that passes muster on nearly all expectations. Stephen Tung meets the fans halfway with spectacular action for the fight scenery, human and creature alike, and with ample gore (severed limbs, body impalement, mauling etc.) for good measure.

There’s no sequel set-up here, though it would be interesting to see what becomes of the live-action “Zhengtu” treatment offered here by Giant Pictures with Chan at the helm and Soi Cheang back to produce. Of course, there’s no telling when such a film production may arise as Covid-19 continues to reshape the film industry to certain standards, from a logistical as well as financial standpoint; Production on Double World was completed in part with the efforts of streaming company iQIYI in order to improve the film’s theatrical experience for home viewing, enhancing Dolby Vision and Dolby Atmos technology with TV companies. Such may be the future of movie consumption as the world staggers to get back on its feet. At any rate though, should doors opens for a follow-up of some kind, then Chan’s Double World is a fine way to start, theatrical release or not.