The official Twitter newsfeed above has announced the completion of post-production for the upcoming multi-platform episodic feature-length release of Street Fighter: Assassin’s Fist. Those who have been keeping up with updates within the past few years have been granted several treats along the way, with stills (like the latest two below), behind-the-scenes photos and videos, and interviews regarding the project which intially earned its popularity with the 2010 conceptual short film, Street Fighter: Legacy. 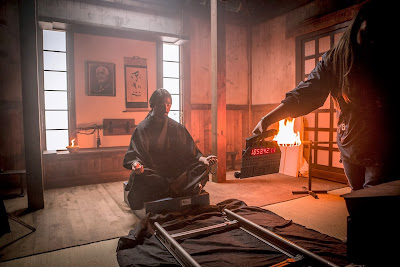 Primed for a 2014 release with worldwide distribution plans currently setting in motion, Street Fighter: Assassin’s Fist is the latest labor of love from creators, writers and co-stars, lead actor Christian Howard, and director and action choreographer Joey Ansah. The film is set as an epic origin story that deals with the dark legacy of the deadly martial art, Asatsuken (the Assassin’s Fist)

Howard stars as Ken alongside fellow lead actor Mike Moh who plays Ryu, in addition to Ansah who plays Akuma, the older, demonic formation of actor Gaku Space‘s character, Gouki. Also starring are Akira Koieyama (pictured in both photos) and Shogen Itokazu who respectively portray that of the older and younger renditions of the character, Goken, along with actress Hyunri as Sayaka, actors Togo Igawa as Master Gotetsu, Hal Yamanouchi as Senzo, and Mark Killeen (pictured in the first photo) who plays Ken’s father.
Stay tuned for more info.

Kitamura's LUPIN III Gets A New Set Photo And Release Date KILLERS Gets A New Trailer For You To Enjoy, You Sick Bastard