KILLERS Gets A New Trailer For You To Enjoy, You Sick Bastard 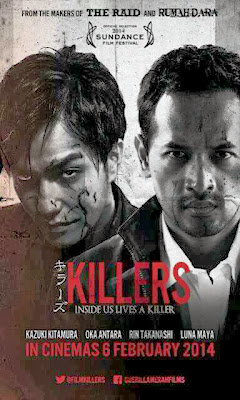 Remember the first teaser for Killers, the latest Indo-Japanese action horror thriller from co-directors Kimo Stamboel and Timo Tjahjanto (dubbed accordingly as “The ‘Mo’ Brothers”) from October? Well, December is here as we are just weeks away from the film’s upcoming four-night premiere at next month’s Sundance Film Festival, and Twitchfilm just forwarded one of two new posters, in addition to the latest trailer from co-production company Nikkatsu, which, among other things, delivers in terrific, gut-wrenching, skin-slicing, repeat-stabbing, vehicular manslaughtering, freefalling and blood-letting fashion.

Killers stars Kazuki Kitamura, Oka Antara, Rin Takanashi, Luna Maya and Ray Sahetapy, and is also produced by PT Merantau and XYZ Films, who are also behind director Gareth Evans’ s next, The Raid 2: Berandal, for which a full trailer may be released on December 31.
Killers will premiere in Japan on February 1, 2014 before its currently slated for a domestic Indonesia release on February 6 pending further distribution news.
SYNOPSIS:

Mr. Nomura is an eerily handsome, sharply dressed, sociopathic serial killer who preys on the women of Tokyo. In Jakarta, a world-weary journalist named Bayu finds himself unexpectedly falling into vigilantism after brutally killing two sadistic robbers. When each posts videos of their violent sprees online, the pair find one another on the Internet and begin a toxic and competitive duel. While Bayu clings to the hope that he can resume a normal life, Nomura continues to spill blood without remorse. Killing, advises Nomura, is something everyone ought to consider.