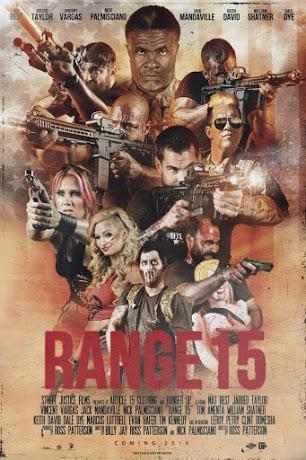 Writer and director Ross Patterson didn’t have many fucks to give last year when he went to YouTube and released his no-budget hybrid creature feature, Helen Keller VS. Werewolves. Rest assured, it wasn’t exactly a setback as it garnered him just enough attention from the film-hungry folks ovet at military brands Article 15 and Ranger Up who took to Indiegogo to crowdfund their latest sci-fi zombie romp, Range 15.
Much to their avail, the crowdfunder was a success and the film has since become a reality with a cast and crew comprised of all veterans, and a story that pits a ragtag team of hard-drinking, partying soldiers and centers them as mankind’s last hope against the zombie apocalypse. In short, it’s their response to Hollywood’s lack of decent military cinemafare with a film, while indie in nature and schlocky depending on who you ask, that promises to bring you just the kind of comedic, knuckled-up, locked and loaded splatterfest that “Hollywoodn’t”, and they’re probably right!
SYNOPSIS:

A group of veterans wake up after a night of partying to find out that the zombie apocalypse has spread across the United States. Together, they must fight their way across the country in order to find a cure for the outbreak and restore freedom before it’s too late.