Review: KUNG FU YOGA (2017) Is A Meditation On What Makes A Jackie Chan Film Fun To Watch Again

Really, it’s almost as if Jackie Chan is sort of just checking off his bucket list for this one. That’s the feeling that I got while watching through to the end the celebrated action star’s latest, Kung Fu Yoga from director Stanley Tong, and in parallel, I can’t really complain as much. I got a little tired of some of the more goofier stuff Chan was doing lately, particularly with CZ12 which Tong produced and so it’s pretty rewarding four years later to see these two back together.

Granted, the film is still sort of goofy in certain instances – one example is when our main man meets actress Disha Patani’s role for the first time. The woman is beautiful as all hell, but there’s absolutely no attempt at subtlety here as Chan gazes onward with celestial melody as if the heavens peeled back the clouds open to allow the light to shimmer and sounds of angels singing in the background to be heard. It was cartoonish and eyeroll-inducing and thankfully, we only get two of these in the whole film and to its credit, it mostly keeps things moving before meandering and floundering too much into mediocrity and boredom.
Kung Fu Yoga brings Tong together with Chan for the fifth time as director and star, respectively, apart from the former producing the latter’s aforementioned 2012 film and so on. Chan, who is no stranger to being called by his own name in some capacity in his own movies (much less the archeologist/professor setup) stars as Dr. Jack, an archeological professor who is sought after by the aforementioned Patani in the role of Amishita, a professor eager to find the lost Magadha treasure. From the snowy mountains and hills of Tibet to the bustling roads of Dubai and the treacherous underground caves beneath Indian temples, our two professors and their respective teaching assistants set off on a globetrotting adventure to find the treasure whilst fighting to preserve it, as well as its historical legacy from the ruthless Randall, a descendant of an ancinet rebel general eager to restore the honor of his ancestors.
The first five minutes offers a spectacular CG number introducing said general opposite Chan’s likeness to preface the film’s story mildly tying into Chinese folk lore a la monk Xuanzang’s journey to India. Visually, it probably won’t sit well depending on who’s viewing but hardcore fans will get a kick out of seeing a youthful image of our star in a grand action sequence that will have them putting on The Young Master DVD once they’re done.
Yoga exponent Miya Muqi makes her screen debut along with Exo frontman, Lay as Jack’s teaching assitants and thankfully the film outlasts any of the film’s secondhand attempts at establishing silly romantic filler that services no one. The same goes for Indian actress Amyra Dastur and actor Aarif Lee who join in on the supporting end as well and from there, some of the best qualities here unfold from our performers. Charming is one moment when Dastur and Lee in the respective roles of Kyra and Jones are held captive in Randall’s hyena exhibit when the incorrigible Kyra’s nose starts running as she ponders her imminent death in tears. Needless to say, it doesn’t help to be tied and missing pack of Kleenex.
Others include Chan having his way with a Wing Chun dummy in the first half hour to impress a girl, as well as some exceptional stunt sequences featuring Kyra with actress Muqi in the role of Nuomin, eschewing the typical damsel-in-distress approach, putting on their fighting shoes and acting as a double-team against Randall’s henchmen; It works amply when compared to watching Chan and Lee do a number on the henchmen along with Putani who performs equally entertaining next to Chan in their scenes as well. Lee, trusty and keen on action roles and provenly much more than a pretty face, is delight to see in the role of charismatic Jones whose father was once friends with Jack. Hence the connection.

The action is not without a little bit of scruituny, however, and that may measure on your tastes. Over-the-top is one way to put it with our characters often put in situations where they have to fight or struggle with CG-animated animals when they’re not dealing with humans. That lion you saw riding shotgun during the car chase in Dubai with Chan at the wheel in one of the trailers is a thing that exists in Kung Fu Yoga. Also, it doesn’t end there, and thankfully it’s one of the higher points of the film’s comedy despite the camp.

Sonu Sood’s Randall is a towering, brooding mass of muscle, dashing good looks, dark eyes and perfect hair who commands birds of prey as did his ancestors, catches things in midair without looking, and can leap out of cars post-collision with neither a scratch, and again, nor one stitch of hair will be out of place. Heaven forbid. Sood only has a few moments of action, although his lanky, muscular build serves him well as a tough boss match against Chan, only without the equal fighting prowess. His hand-based fighting style sets the premise of things, allowing Chan the time and space for a terrific, classic Chan-style retort.
Of course, as identical as Chan has become in his methods with family adventures, the story itself builds toward a larger, jovial message. The finale here welcomes a less skeptic and fearful exit centric on the values of Buddhist teachings, respecting history and all its relics for what they bear. It’s a capricious pivot suitable for a family-knitted actioner like this long after surviving nearly two hours of archeological dangers and spills with beautiful women who can thankfully handle themselves.
There’s at least one other stumble in the film that stood out to me, particularly as the film further accomodates its sundry cast line-up and juggles between English and Mandarin. It’s a scene where Patani is in the same room with two people speaking Mandarin and she nods like she can understand perfectly, until several scenes later when she’s literally inches away from Chan and asking what he and another character said to each other. In Mandarin. I almost didn’t know what to do with myself and wondered if Chan and anyone else in the cutting room ever caught that. Funny. 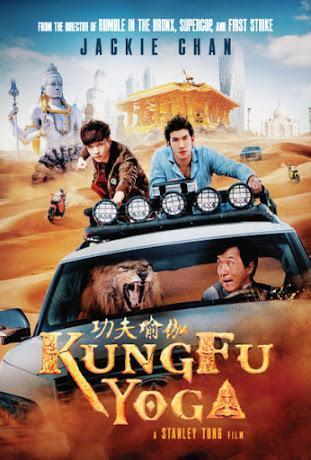 I still have to see Skiptrace and a few others I’ve missed, but I can honestly say that Chan has redeemed himself here in some ways. Admittedly, despite my weariness and feeling disenfranchised as a fan years earlier, Kung Fu Yoga had me intrigued with Chan, an artist in many aspects, and the prospects of this film being both a dramatic and musical affair as an international production with an exceptional cast visible in markets in China and India. It feels pretty welcoming to promote a Chan film again, and refreshing at that.
Kung Fu Yoga is a healthy blend of Chan’s signature martial arts action, comedy, love, adventure and thrills. It’s still a goofy movie here and there, only this time you’re not left feeling like drinking bleach and doing a line of cocaine just to make things fun and interesting. I welcome and any and all reading this review to go and see this film when it finally reaches the U.S. this Friday from Well Go USA.