SAN ANDREAS Star And Director Reunite For RAMPAGE Next Year! 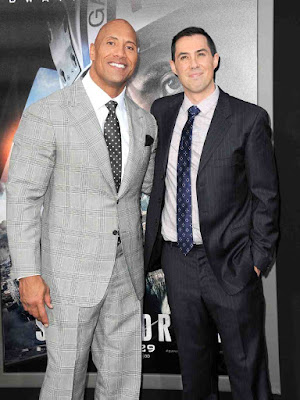 Deadline is bringing word that star of the upcoming action comedy, Central Intelligence, actor Dwayne Johnson will be sustaining his action star-status in the forthcoming production of the live-action game adaptation, Rampage, reteaming once again with director Brad Peyton. The two previously worked on Johnson‘s latest role in Peyton‘s new disaster flick, San Andreas, which grossed up to $460 million dollars in theaters, so it appears this latest update is one that clearly makes sense.

Johnson was initially reported as the first addition to the film back in June with Non-Stop scribe Ryan Engle on scripting duties. Nil is currently known about the plot in the public eye, although the gist of it will largely follow Johnson by way of the classic 1986 Midway game as he takes on three giant monsters – a gorilla, a lizard and a werewolf – rampaging the city. Hence, the title, obviously, or however which way you choose to apply that theme to a Dwayne Johnson vehicle. Either way, you already know this one is preparing to be another hit by its slated 2017 release.
Beau Flynn is producing the film under his FlynnPictureCo banner at New Line Cinema with Johnson also backing the film via Seven Bucks Productions. Cameras are expected to roll next summer after Johnson wraps Furious 8 for Universal Pictures.
Come to think of it, now would be a good time for Peyton to consider the prospects of helming the 2019 release of Shazam since Johnson is already attached as the anti-hero, Black Adam. After all, he did get into talking about directing superhero movies just a few months ago, so…why not?
Comment below or discuss this on our Facebook page, and stay tuned for more information on Rampage!

Familiar Villainy Emerges In The New Trailer For SPECTRE Raven Banner And Sinister Cinema To Showcase TURBO KID In Canada Next Month!