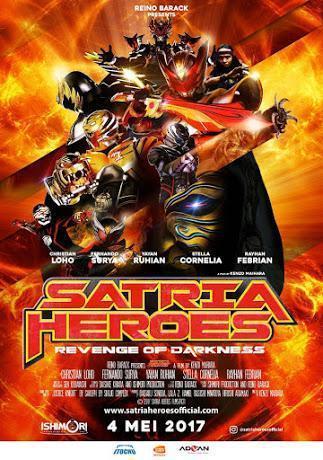 Tokusatsu gained a foothold in Indonesia with the 2013 series run, Bima Satria Garuda. Since then, the show which centered on a young hero’s discovery of a power stone to take on the evil Vudo empire after a mysterious alien portal to Earth emerges, spawned a sequel series in 2015 and is now on deck for a full feature film expansion.
That film now exists with the most recent Jakarta Toys and Comic Fair 2017 premiere of the first trailer for Satria Heroes: Revenge of Darkness well over a week ago. The film is directed by Kenzo Maihara and sees a cast that includes actors Christian Loho, Rayhan Febrian, Aditya Alkatiri and Fernando Surya, along with actor and martial arts star Yayan Ruhian.
Available plot info is pretty thin to find but fans of the series might have a better idea about where this particular installation and where it will go. As for the trailer, granted it delivers the usual sort of made-for-TV spectacle but still looks inviting for the audience it was meant for.
Check out the trailer ahead of the film’s May 4 release.