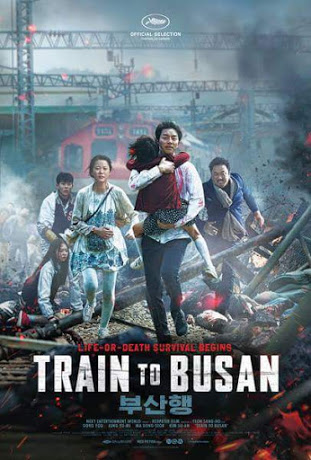 Lead cast: Gong Yoo, Ma Dong Seok, Jung Yu Mi, Kim Soo An
Seok Woo and his daughter take a high speed train to Busan. Just as the doors are about to close, a passenger infected with a mysterious virus dashes aboard and soon feeds on one of the attendants, causing a chain reaction, and quickly transforming the potential father-daughter journey time into a zombie fest on wheels. You can run to the nearby car, but how far can you really run on a moving bullet train?
When assessing Train To Busan, it’s important to keep in mind that this is a zombie movie; it’s meant to deliver entertainment value, not intellectual or emotional enlightenment. Once I came to that agreement with myself, I found that I actually enjoyed it a lot. Though I must admit there were a couple scenes that tugged at my feelings, and a couple unexpected deaths as well. So, while this is a fun intense action thriller kind of film, it’s not an empty one.
The two lead zombie opposers are portrayed by Gong Yoo and Ma Dong Seok, both incredible, accomplished actors on small and big screen. I had the pleasure to see at least one major project from each, so this was a collaboration worth anticipating. Gong Yoo had always been a romantic hero in my mind, ever since Coffee Prince something like a decade ago; I was surprised to see that he is capable of kicking zombie butt just as well as wooing the ladies. On the other hand, there was no surprise at the action mastery of Ma Dong Seok who has been gaining recognition as one of the leads in popular recent crime dramas Bad Guys and Squad 38.
Gong Yoo and Ma Dong Seok show us a delightful duo of clashing personalities, with one important thing in common: they’re both fathers struggling to protect their daughters from the ongoing undead apocalypse. This detail stands out from the snarling gnawing outrage. This is where it connects with the audience. Not college kids having too much time to kill (does anyone ever feel bad for those in horror films?) – but fathers protecting their daughters.
I recommend Train To Busan for horror movie fans, and if you have the opportunity, I recommend seeing this in theaters. I promise you won’t get bored with this action and tension packed thriller.

Enjoy the ride when Train To Busan opens in select theaters this Friday, courtesy of Well Go USA!