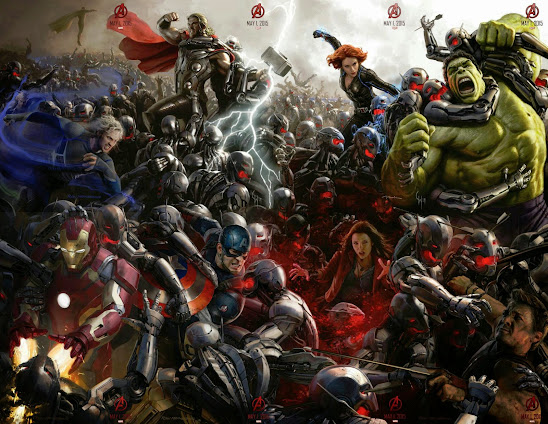 Comic-Con hype has been rife with a plethora of updates regarding superhero movie multifranchise business dealings. I’m not there for all the action so it feels a little overwhelming and difficult to keep up with as things are always happening from many angles (i.e. the sudden mysterious release date additions and switcheroos that tooks place earlier this week for several Marvel universe-related titles as well as the forthcoming third and fourth films of the Amazing Spider-Man franchise).

But here’s what is already known, and considering that everything you are about to read can be Googled, I didn’t bother linking too much. So take my word for it if you will.

⚫Marvel’s Guardians Of The Galaxy is poised for an animated series while the upcoming August 1, 2014 release of said film will possibly see the return of Thunderbolts helmer-hopeful and Avengers 3 rumor subject, director James Gunn back in the chair for the July 18, 2017 sequel should the first film be a success. The sequel hype was also headlined with the company of Josh Brolin attached as intergalactic supervillain, Thanos.

⚫Director Peyton Reed’s 20th anniversary as a comic-con attendee invited some further updates regarding the July 17, 2015 release of the new film, Ant-Man. Actors Patrick Wilson, Matt Gerald and Kevin Weisman are out of the new film, but the team did make an appearance this weekend, to discuss the film including sharing character annoncements for actress Evangeline Lily will play Hank Pym’s daughter, Hope Van Dyne, and actor Corey Stoll will play the film’s main villain, Yellowjacket. Michael Douglas stars as Pym along with Paul Rudd as the lead.

⚫Doctor Strange, in development hell for a number of years now, is up for a feature film of its own, and while it hasn’t been part of the Marvel SDCC slate as things stand, actor Joaquin Phoenix is reportedly up for the title role. Not much else has been said on the film since it recently began moving forward in recent weeks. Stick around!

⚫Actress Haley Atwell is tapped to officially star in ABC’s newest spin-off action series, Agent Carter, following its greenlight back in May. The character stems from her previous appearance in the 2011 film, Captain America: The First Avenger and this year’s earlier sequel, Captain America: The Winter Soldier. Joe Johnston, who directed the first film, is currently in talks to direct the fourth episode while the sequel helmers, Anthony and Joe Russo will kick off the series upon its TV debut in January 2015 during the mid-season break of Agents Of S.H.I.E.L.D.; The Russos will also direct Captain America 3 for its release on May 6, 2016 against Warner Bros./DC film, Batman V. Superman: Dawn Of Justice.

⚫The biggest crowdpleaser so far has been director Joss Whedon’s Avengers 2: Age Of Ultron, which garnered some cool concept artwork over the week, which in turn, assembled a banner of our title heroes taking on the robot minion army led by Ultron, played by James Spader. That image you can check out above, but the folks in Hall H were also given an exclusive look at some epic footage from the forthcoming film which is said to showcase what CinemaBlend cited as a “whole new style of filming”. The film arrives on May 1, 2015, and you can now catch their latest panel right here!

⚫Welsey Snipes wants back in as Blade! The actor best known for playing the role in the previous trilogy spoke to MTV to share his thoughts on hopefully returning to the fray as the urban vampire hunter intricately skilled in running circles around bloodsuckers and their pandering human turncoats. ‘Blade’ chasing the ‘Twilight’ kids around? Hey man, there’s always a possibility, and I’m open to it.” he says. “There have been rumors around that we may explore the opportunity, so give me one more shot!”. Rumors aside, Snipes also added “I’d love to get back in the suit again and do some things I’ve learned how to do now that I didn’t know how to do then. I think we’re better at making that kind of a film now. Some of the things we did in the early parts of the franchise were experimental and now they’ve become customary in a lot of the ‘Avengers’ films and other comic book adaptations.”. Snipes joins the epic cast of The Expendables 3 on August 15, 2014 (provided you weren’t a dick about it and chose to pay for a ticket instead of stealing its leaked DVD copy online).

I’m pretty sure I missed a bunch of other stuff, but there are titles for which more details are required, particularly regarding whether or not John Boyega will star in Black Panther, what fans can expect for Doctor Strange, and details pertaining to Captain America 3 and Thor 3, and much more as Marvel continues to expand its epic universe. You can catch more Marvel updates today from San Diego Comic-Con, all right here in the embed below!