THUNDERBIRD Trailer: Seo Hyun-Woo Gives Chase To The Hottest Wheels Of The Night 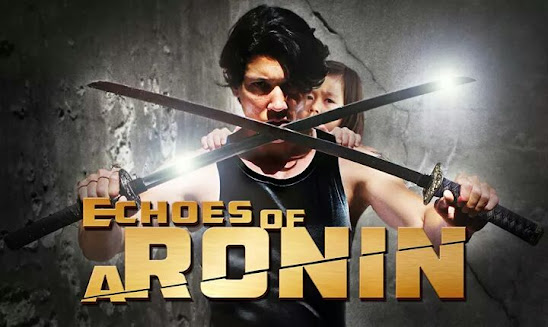 The story is set in a contemporary Scandinavian/Asian environment with a universal story about injustice and loss of innocence combined with recognizing ones destiny.

This is all seen through the eyes of a child and through her experience see how man, despite being protected by morals and a strong code of honor, can be thrown off balance and become overtaken by jealousy, desire, love and revenge.

The film explores her loss of innocence, the child parent relationship with the ongoing struggle to find balance in life and ultimately, her victory over the traumatic experience.

At its core, award-winning filmmaker Shaky Gonzalez‘s newest foray into action is a thing for all who have a distinct affinity for samurai movie lore, on top of thrilling action and touching drama. That effort now takes shape in the newly released shortfilm, Echoes Of A Ronin, with results that should be satisfying for its home audience in Denmark and abroad.
Actor David Sakurai plays Shin, whose surrogate father passes the family restaurant onto him before his dying breath. However, it is not before long that he finds his wife, Aiko (Nukâka Coster-Waldau), in a pool of her own blood, murdered at the hands of his greedy and unrelenting stepbrother, Ken (Thomas Chaanhing). With his young daughter, Cho-Ko (Katinka Elmin Danielsen), by his side, and his mind and soul clouded by pain and tragedy, Shin forges a warpath of death and self-destruction on a mission of vengenace that will end one way or another.
Echoes Of A Ronin is a small-scale Eurasian crime drama filled with intensity and great action sequences to boot. On another level, it was also an adequate opportunity for Gonzalez and Sakurai, who also wrote and produced the short together, to incorporate the jidaigeki genre in a contemporary setting. It is not a new formula, but that is not to say that there isn’t any potential here, only quite the opposite.
Much of the story centers mainly on Shin’s quest for vengeance, vocally narrated by actress Sofie Bech who plays an older version of Danielsen‘s character. Beyond the story’s morose and grim setting, however, Sakurai‘s role of Shin, isn’t really a one-note performance as we do see just a few layers, but only a few, and it’s not too much of an issue, to be honesr. There is poignance and tenderness between Sakurai and Danielsen that keeps the drama mildly affective throughout the film’s short duration, and it does help Sakurai in the end.
Sakurai‘s acting and his ability to perform martial arts action along with actor Chaanhing and the rest of the action cast are noteworthy here, thanks in large part to the stylings of fight choreographer Tim Man (Ninja: Shadow Of A Tear). And to top it off, even Man himself manages to squeeze in some one-on-one screentime with the lead actor in the second half. It’s not the best scene, and mostly because of the duration of the shortfilm altogether. Still, it’s a great sight to see prior to the climatic ending.
More importantly though here, for Echoes Of A Ronin, are the small nods here and there to elements previously seen in Japanese classics. If you are well-versed in Japanese cinema, you may be able to catch some of the easter eggs in between, with some more subtle than others. I personally don’t have a huge background in Japanese cinema, although I have always been intrigued by it with my enjoyment of a handful of films within the last couple of decades. To say the least, if you find yourself watching Shogun Assassin or any of the Lone Wolf And Cub movies as a result of this project, obviously you are forgiven.
Echoes of a Ronin made quite a splash this year through the film festival circuit in Denmark before making some noise last month in North America for its premiere at the Action On Film Festival. There, it received three nominations, including two for Sakurai for Best Male Action Star (Short) and Male Action Performer of the Year. Not bad for someone who stepped back into the action arena only a few years ago with a new test fight after a small hiatus from the genre. But more importantly, Sakurai, Coster-Waldau, Channhing and Danielsen bring soulful performances to an experimental beat-for-beat, action-packed story which initially serves as a preamble for a potential feature film. In lieu of the film’s ending, whether or not the lead happens to be male or female by then, hopefully it will happen.
At least for now, Echoes Of A Ronin is a great way to spend twenty minutes, as well as an ample intro into Sakurai as an action star ahead of his upcoming appearances in least two more action titles: Sidney Lexy Plaut’s Dark Samurai and Thomas Eikrem’s Le Accelerator. As a programming note, Sakurai is also making an appearance at this year’s Fantastic Fest with the Hans Petter Moland-directed Norwegian action comedy, Kraftidioten (In Order Of Disappearance), prior to the release of Hungarian rom-com, Liza, The Fox Fairy.
Stay tuned for more info. In the meantime, watch Echoes Of A Ronin right now in the embed below and subscribe to the project’s official Facebook page to lend your support!