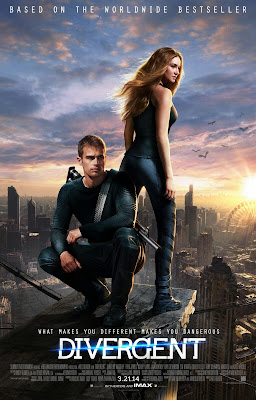 On Monday night, Summit Entertainment published their new release date slate for several of their upcoming films, two of which will follow up the forthcoming release of director Neil Burger‘s science fiction action thriller, Divergent.

Based on author Veronica Roth’s #1 New York Times bestselling trilogy of books, the 2D/IMAX March 21, 2014 release of Divergent stars Shailene Woodley and Theo James in a story of a post-apocalyptic society split into five factions where a young woman’s anomalic status may determine the fate of her life, her family, and her world. As per the book trilogy, Divergent will then follow up with the return of Woodley and James in Insurgent and Allegiant for March 20, 2015 and March 18, 2016, respectively.
The other Summit Entertainment releases are writer/director Alex Proyas’ Gods of Egypt for February 12, 2016 with Gerard Butler, and the fifth installment of the Step Up dance movie franchise, Step Up All In for July 25, 2014 from director Trish Sie.
Divergent also stars Kate Winslet, Maggie Q, Mekhi Pfeiffer, Zoe Kravitz, Miles Teller and Jai Courtney, with Ray Stevenson, Ansel Elgort, Ben Lloyd-Hughes, Ben Lamb, Christian Madsen, Amy Newbold, Ashley Judd and Tony Goldwyn. The film recently unveiled its first full trailer. Check it out below and stay tuned for more info.
SYNOPSIS: