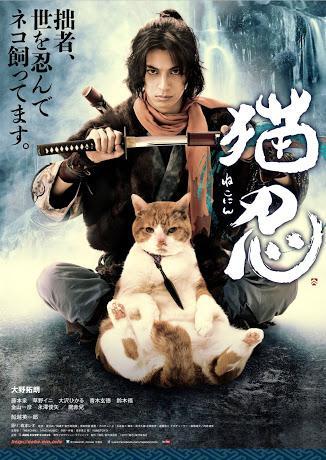 So. What’s a ninja to do when he comes across what a cat he believes is his father?

Anyone?
…Yeah, I’ve got nothing either. But that’s the question facing a young ninja played by Ohno Takuro in Neko Ninja which opens on May 20 in Japan from AMG. Enter Watanabe Takeshi once more for this latest round of feline-centric action and comedy in the wake of successes like the Samurai Cat tvk drama in 2013 and the two subsequent films that followed – the second which he directed.

Kagerota, a young ninja of the Kiryu family, has lived without feeling affection. His father Kenzan is a legendary red-nosed ninja. Kagerota parted from Kenzan at the age of 10 and loses all contact with his father.

One day, Kagerota goes to the city of Edo with his fellow ninja for a mission. It is an easy task of stealing a special golden fish from a Daimyo Yashiki house. Kagerota sneaks into the house successfully. Just when he leaves with the fish, Kagerota feels a creature’s presence close by him. It is a red-nosed fat cat. The cat makes him nostalgic as it looks somewhat alike his father.

And it’s all downhill from there, and now with a little more to sample from the film’s international staple at Nikkatsu who have unveiled an official trailer with English subs to boot. Check it out!

LEGEND OF THE NAGA PEARLS Spawns A Trailer For Lei Yang's Fantasy Adventure The Epic Gang Saga Continues In The First Teaser For HiGH&LOW THE MOVIE 2: END OF SKY