The Fast And Furious Justin Lin, Still Holding It Together 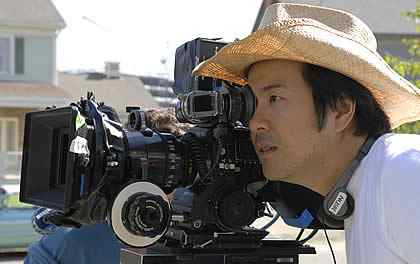 With five films now under its belt and a sixth (and seventh) along the way, the $1.5 billion dollar Fast And Furious film franchise has become a major domestic and international success for Universal Pictures. It all started in 2001 when director Rob Cohen brought together a dynamic cast of characters featuring Paul Walker, Michelle Rodruguez, Jordana Brewster, Vin Diesel, Chad Lindberg, Matt Schulze and Rick Yune in a compelling story about respect, loyalty and self-discovery in the heat of battle and high speed heists.

The first film, The Fast And The Furious set the ultimate stage in the world of illegal street racing, where allegiances are tested, lives are lost. And the only question that remains is how far, and fast undercover cop Brian O’Conner (Walker) is willing to go to ultimately choose between fighting for the woman he loves, Mia, (Brewster) or risk losing her in pursuit of her elusive brother, Dominic Toretto (Diesel).

The sequel, 2 Fast 2 Furious which also stars Eva Mendez, Christopher “Ludacris” Bridges, Devon Aoki and Cole Hauser, and directed by John Singleton, dives into the new alliance between our hero from the first film, allied with an old friend, played by actor and singer Tyrese to take down a major drug cartel under the watchful eye of U.S. Customs, in exchange for clean records and new lives.

In a sharp turn of events, Justin Lin helmed the third film of the franchise, The Fast And The Furious: Tokyo Drift,taking the story to Japan, with a new cast featuring Lucas Black, Brian Goodman, Nathalie Kelley, Bow Wow, Sung Kang, Brian Tee and Sonny Chiba, with a brief re-emergence of Vin Diesel’s character from the first movie. Tokyo Drift focuses on the character, Chris Boswell (Black), the troubled son of a U.S. Navy officer in a reluctant binding agreement with a street racer, Han, and his crew aftet losing a contest to his infamous Yakuza brother, D.K.. Bound by honor, tradition and vengeance, new alliances are forged, a son’s humility is tested, and only a race between bitter rivals will determine the ultimate battle for redemption in the eyes of the Yakuza.

Fast And Furious, the fourth film by the same director, returns the franchise to its roots and reunites select members of the cast from the first and third films in the Dominican Republic and Los Angeles, with new faces added to the story, Gal Gadot, Laz Alonzo, John Ortiz, and recording artists Tego Calderon and Don Omar in a story that illustrates a tragic turn for Torretto’s girlfriend and partner in crime, “Letty”, played by Michelle Rodriguez. The moment re-initiates the crossing of paths between cop and fugitive when Torretto ultimately sets out to find the men who killed her, only to find F.B.I. agent O’Connor infiltrating the same people resposible for a drug smuggling operation across the border. O’Connor’s re-emergence opens old wounds and sets the course for interesting plot twists and high speed chases that lead the two on a pulse-pounding collision course that will once again test their loyalty and trust, based on a friendship once formed on falsehoods for the sake of the badge.

In 2011, Lin returned the franchise to the big screen once again in Fast Five, the start of a new trilogy reviving pivotal cast members from all four previous films, with Matt Schulze from the first film and Eva Mendez from the second film, Elsa Pataky, blockbuster action powerhouse, Dwayne “The Rock” Johnson, Michael Irby and Joaquim de Almeida. Setting the stage in Brazil, when a heist on a high-speed train goes awry, Torretto and his team, now fugitives of the las sets out to settle the score with a crime lord and his personal army comprised of the entire Rio de Janeiro police force. Their mission is compromised when D.E.A. agent Luke Hobbs sets out to recover the bounty on their heads, leading to a dramatic turn of events and changing allegiances that later set the course for the upcoming film, Fast And Furious 6.

With the success of all five films so far, I say it was good decision making on behalf of the studio to help keep director Justin Lin on board with actor Vin Diesel aiding in the role of co-producer for the fourth, fifth and now, sixth film along with Neal Moritz, Michael Fottrell and Clayton Townsend, and writer Chris Morgan formulating the story that began with the work of Gary Scott Thompson, Erik Bergquist, Derek Haas Michael Brandt and David Ayer. In my opinion, these movies would not have happened if they kept on switching directors and characters between installments. Sometimes it’s a good thing or it doesn’t really have an affect on the film franchise itself, with such examples like the Die Hard movies or the Mission: Impossible series. But then you have the initial Batman movies from a little over a few decades ago that completely warp the overall look and potential for the stories, Mortal Kombat: Annihilation-which saw a blatant and painfully visible change in cast, costume and artistic direction, despite supposedly being a moment-to-moment follow-up from the end of the first film, and the Blade Trilogy that saw a bitter end between actor Wesley Snipes and director, with a follow-up TV series that was even less-fitting.

Different directors, writers and producers means different visions for a film, no matter what the franchise. So it is always a major crapshoot when producers make suggestions for a film that include some small, and some drastic changes. Sometimes development falls short when there is a clash of creativity and differences fail to settle that ultimately become irreconcilable, such as with Nicholas Cage’s Superman film, or the evident rewrite of the upcoming Justice League movie and the reboot of the Ninja Turtles set to finally begin shooting this April in New York City.

By Tokyo Drift, I was a little worried that the Fast And Furious franchise was going to get lost and thrown into some sort of direct-to-video hell. The characters all have their own unique story arc that will help build the epic synopsis for all seven films, and fans seem to love where it is going. As to why some key decision makers behind the camera would ever want to ruin that is beyond me or any fan of a good action film series. 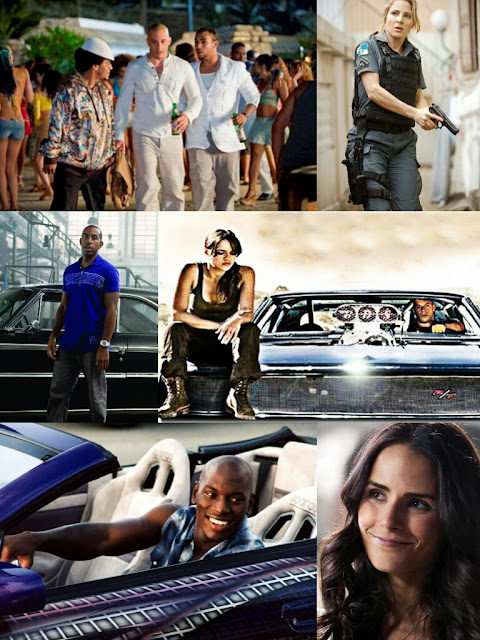 I am very proud of the work Justin Lin and Universal are doing with the film series. Sure, it makes money. But even more so, in an age where consistency in films seem so is scarce, all Fast And Furious films are about as consistent as it gets, with characters such as:

●Vin Diesel in the iconic role of Dominic Torretto, a tried and true street warrior who never forgets where he came from on the path to where he is going.

●Paul Walker, who journeys the character of Brian O’Conner, from lawman to wanted fugitive, having chosen a family that has given him something worth fighting for without losing his soul or identity.

●Jordana Brewster as the ever-faithful Mia Torretto, who found resolve while caught between her love for Brian and helping protecting her brother from the long arm of the law for years, now pregnant with Brian’s child and upping the stakes even higher for Brian to help keep his family together.

●Michelle Rodriguez as the beautiful and dangerous Letty, who goes above and beyond the call of duty in a surprise twist that forces Dom to re-examine the truth behind what happened on the night of her supposed death.

●Tyrese Gibson who plays Roman Pierce, Brian’s old friend, charmed with wisecracks and wit, and a business-oriented realist who talks the talk, walks the walk, lives for the fast lane and is never afraid to show anyone on the road who is boss.

●Sung Kang who plays Han a drift-racer with a never-ending cool streak whose abrupt demise in part three is met with his re-appearence as a pivotal function in the adventures seen in the fourth and fifth film as a precursor to Tokyo Drift.

●Matt Schulze as Vincent, Dom’s best friend, having lived a new life in Brazil since the events in the first film, but evidently risks it all amidst a daring escape in the name of helping the only family he had ever known and loved.

●Gal Gadot as the beautiful and deadly Gisele, a former agent of The Mossad and ex-liaison of criminal drug lord, Braga, newly allied with Dom and his crew and living by her own moral code, with a unique skill set that proves to be unbound when getting results.

●Christopher “Ludacris” Bridges as Tej, a former wheelman with a knack for hands-on knowledge of tech, electronics and spy equipment who can still put the pedal to the metal when needed.

●Eva Mendes as Monica Fuentes, the U.S. customs agent who went undercover to help take down Carter Verone in the second film, who appears at the end of part five to help bring in an interesting turn of events for Agent Hobbs, Torretto and his crew.

●Elsa Pataky as Elena Neves, disbanded from her former corrupt employer and Dom’s newfound love interest whose emotional and romantic investment will eventually obligate her to face Dom’s past with him.

●Dwayne “The Rock” Johnson as Luke Hobbs, a D.S.S. agent and an old school bare-knuckles manhunter whose team dies in a hail of gunfire, as he suddenly finds himself united with the man he was sent to put back behind bars, in pursuit of a much bigger threat.

●Tego Calderon and Don Omar as Leo and Santos, friends and partners in crime, the comic relief of Dom’s crew who know how to get in and out of any sticky situation, no matter how much they clash. 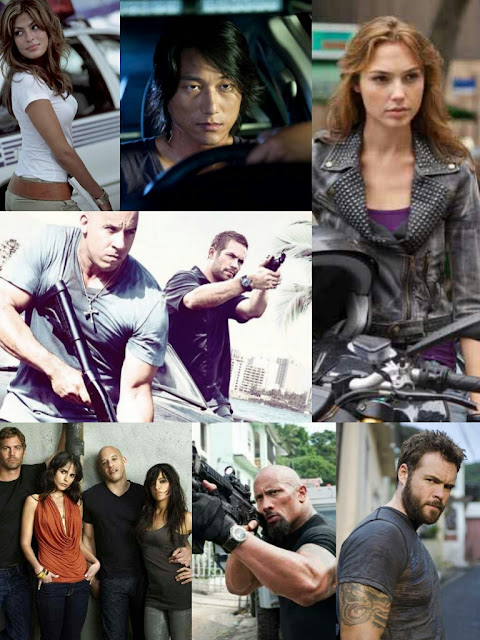 These characters are the bread and butter of this six-part epic, action-packed story that make up the Fast And Furious franchise to this day. These are the characters fans love when they go see these films. No one is getting switched around or replaced, and virtually everything seems to be falling in place as characters added to the mix.

As an action fan, I’m sold. I’m not too heavy into the underground racing and NOS-powered engines and cars and all the hip-hop music used to sell it, but it all serves as an important element to making the Fast And Furious series so identifiable in its own unique way. The series is a whole universe where the races and stunts are huge and spectacular, but the characters are relatable, the stories are gripping, and the motivation behind each character’s presence does not take viewers to any place other than the movie itself. And all thanks, in my opinion, to a cast that never left this universe, with a story that puts intense focus on the importance of honor, loyalty, true friendship and family.

I love these actors and the director for they have done and continue to do for this series. And as an additive, with Joe Taslim in the mix, and provided that Gina Carano is carried over to the seventh film where it is becoming less-than-doubtful that Jason Statham may be taking his place as the villain, I will unquestionably be looking forward to some Fast And Furious fight choreography (pun intended! ^_^), as well as other awesome action movie franchises and projects filmmaker Justin Lin is now attached to, including Warner Bros’newly won rights to a story based on a trilogy of action thriller novels by author Patrick Lee to be published next year.

Lin is making moves, so keep your eyes peeled.