I almost forgot to start putting the Hit List together over the weekend. To be quite honest, I had missed out on several Shaw Brothers titles that I finally had the chance to catch up with, which I will be doing again next weekend, seeing as how weekends give me a little extra breathing room between posts.

But enough of all that. You’re here for what this week brings in the latest installment of The Hit List, so don’t sweat it. First up is the usual set of amazing stunt reels from several of today’s hardworking stunt performers. Their names are Hymson Chan, Marcus Aurelio, Zach Miller, Nancy Young, Jessi Cosgrove, Carl Langlais, Olga Miller, Mykola Galagan, Kevin Barile and stunt coordinator Brett Chan.

We also have a few bits of things to offer in the promo department and the first comes courtesy of director Tomires Ribeiro for his latest martial arts short, Punhos e Leis. Brazil’s own Renan Da Silva Medeiros and Bruno Carmo lead the cast in the story of two theives whose battle for territory in downtown São Paulo turns into a fight for something much more. The project is set to air in 2016, so here’s the trailer to keep you company until promotional material arises.

The teaser just beneath that comes exclusively via Facebook for a new online Star Wars fan short titled Out Of Darkness, designed by fight coordinator Joseph Le with Philecia Hoffer and Aimee Hawkins starring.

TEASER: “Out of Darkness”
In the spirit of Star Wars, my friends and I are releasing our very first Star Wars fan film this week! A lot of hard work has been put into this project. Here’s a little teaser for our film, “Out of Darkness.”#starwars #forceawakens #outofdarkness
Posted by Philecia Hoffer on Monday, December 7, 2015

Next, you will see some artwork for Finnish filmmaker Mikko Löppönen’s own upcoming shortfilm, Eliza. There’s no plot information just yet but it stars Finnish singer and actress Jessica Wolff, someone who is quite familiar with action herself having done a few independent action projects in recent years, namely with Fernando Jay Huerto of Jabronie Pictures.
As for what our title character does or doesn’t do with that knife she’s holding in the poster…well, you be the judge. 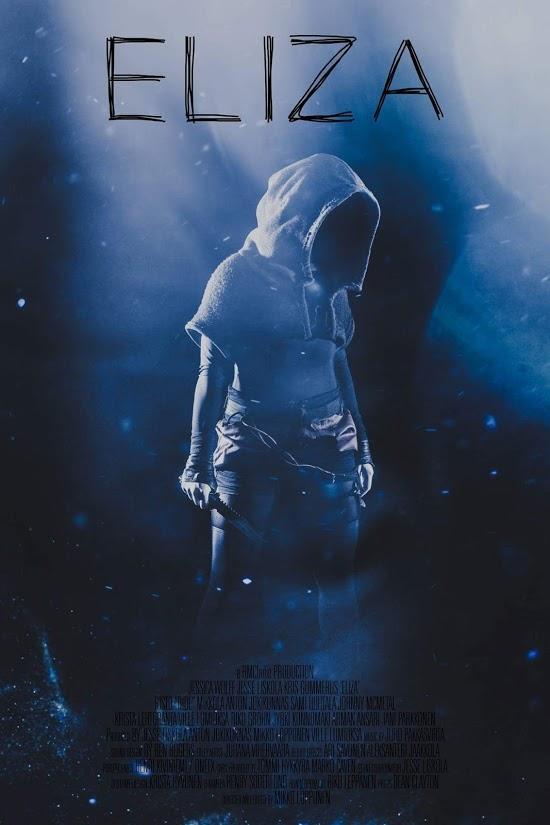 And HERE, well… those of you who have been pining for more of director Street Fighter action from filmmaker Joey Ansah will be delighted to learn that Machinima has begun a new campaign as of this week hailing from the events over at Capcom Cup 2015. Street Fighter: Ressurection is coming, and from the team that brought you Street Fighter: Assassin’s Fist just last year, no less. There’s nothing yet publicly known on any and all prior news regarding Street Fighter: World Warrior, but considering the action the first series received, there’s no question that prospects for this new series are going to be just as magnificent, if not more.

Machinima shared its exclusive teaser this week featuring Kickboxer: Vengeance star, actor Alain Moussi as key character Charlie Nash, back from the dead and ready to flash kick other Street Fighters in the face! The show is premiering exclusively in March of 2016 on go90!

Time to lend some credit where its deserved, and for this, we have a short excerpt from director Nguyen-Anh Nguyen’s recently-completed proof short, Temple. The short runs high on all the tropes invited by dazzling sci-fi noir which centers on actor Osric Chau in the role of a semi-cybernetically enhanced survivor of city on the verge of extinction.

Running about eight minutes long, Temple was briefly released online over the weekend before its removal, and for reasons moreso pertaining to this Facebook post. To say the least, details are pending which could open doors for great things with this project, but do check out the clip below along with these earlier stills to help calm your cravings.

And now, it’s time to f*ck sh*t up with an arsenal of brutal online action from some of today’s talented action actors!

Leave it to rising action star, actor and stuntman Eric Jacobus who kicks things off with another spin on the Tekken franchise, now in the form of a new Street Fighter mash-up between respective characters Steve Fox and a 2D gameplay animation of Balrog. The playlist beneath advances with Kickboxer: Vengeance and newly-cast Street Fighter: Ressurection star, martial artist and actor Alain Moussi to kick things off with a small sampler designed by choreographer Jean Frenette, followed by David Conk’s sequel for this July’s The Bag and last week’s release of Who Are You? featuring LBP Stunts Chicago’s own Nate Hitpas, Youtube channel Ismahawk’s newest Minute Match Up featuring Quicksilver and The Flash, Greg Poljacik’s practice action shorts, Antidote and Friends Don’t Let Friends Lift And Tinder, an exhilarating test fight sequence by performers Moritoki Satoru and Takahashi Hiroshi, Jeremie Shaw’s Blade-inspired short, Draven, and the latest Dardrex/Atom Phly collaborative meta action comedy short, Send Off, with Darren Holmquist and Frank Hernandez and C.J. Thoms!

And last but far from least, if you’re a DC Comics fan pining for more of what “could-be” in film, you have director Toby Bajrovic to thank for the latest indie craze to circulate the web via Perth, Australia. Red Hood: The Fallen is the name, and taking Gotham by storm with actor Simon Arblaster taking the lead in a story that removes Batman from the equation and leaving Robin to dispense his own brand of justice against the Joker and the city’s criminal underworld the only way he knows how…
…But who gets the last laugh?
Watch the short right now and find out!

Last week’s Hit List is still up for grabs, so you know what to do! Other than that, feel free to subscribe to these channels for more exciting content, and if you or someone you know has a stunt reel, test fight or short film worth considering as a Hit, then hit us up at filmcombatsyndicate@gmail.com.

The Undead Emerges In A New Webseries Teaser For STREET FIGHTER: RESURRECTION! SAILOR SUIT AND MACHINE GUN: GRADUATION Gets A New Trailer