Well, this week’s Hit List comes at an opportune moment with several gems worth sharing on top of this week’s fully-loaded stunt reels. I might take a break next week (or not), but in case I decide to, I’ve made sure to load up on quite a bit of material.

In the meantime, let’s make this a worthwhile Hit List to enjoy and for this, we get a great new playlist full of stunt and action demo reels by great guys and gals like Shawn Bernal and Luci Romberg. Following that are videos by Isky Fay, Lloyd Pitts, Jake Osborn, Andrew DiBartolomeo, Andrew J. Neis, Monica Aleman, Stephen A. Davis, Kiril Kostadinov, Dennis Lafond and Bobby Holland Hanton.
The last video in the playlist comes courtesy of someone whose passion for martial arts in sport and on film run as deep as the cuts and bruises stunt performers endure to create and entertain. His name is John Salvitti, and if you’re a Hong Kong cinema head, you know exactly who he is and you know that he’s come a long way in life with a breadth of knowledge on cinematic fight action that delivers. Having just did the work on director Ernie Barbarash’s 2015 thriller, Pound Of Flesh, he now has a fifteen minute featurette showcasing some great moments on set with some of the cast and crew, and I have to say, it’s fun watching Salvitti work.
Admittedly, sometimes I get more of a kick out of watching behind-the-scenes reels than the actual scenes themselves. As an artist myself, and watching Salvitti instruct with such vigor and gusto, I can certainly appreciate the creative process, and especially as a cinephile who also proudly supports the #StandUpForStunts movement.
Enjoy the playlist!
We’re light on promotional gems this week but we do have a fresh new poster, trailer and mini-featurette for Kiyun Sung’s latest shortfilm, The Destined King, set as a period drama about a swordsman with the fate of the kingdom in his possession, and cornered by a former apprentice with a thirst for power and his sights set on the throne. The project is already a favorite among its several festival appearances, including (and not limited to) SENE, Asians On Film, Action On Film and the Urban Action Showcase and Expo, and is expected to finally air this September when it finishes hitting festival screens.
For now, check out all below, including the playlist with the trailer and slideshow featurette with voice over commentary by fight choreographer and fellow contributor to the site, Joey Min. 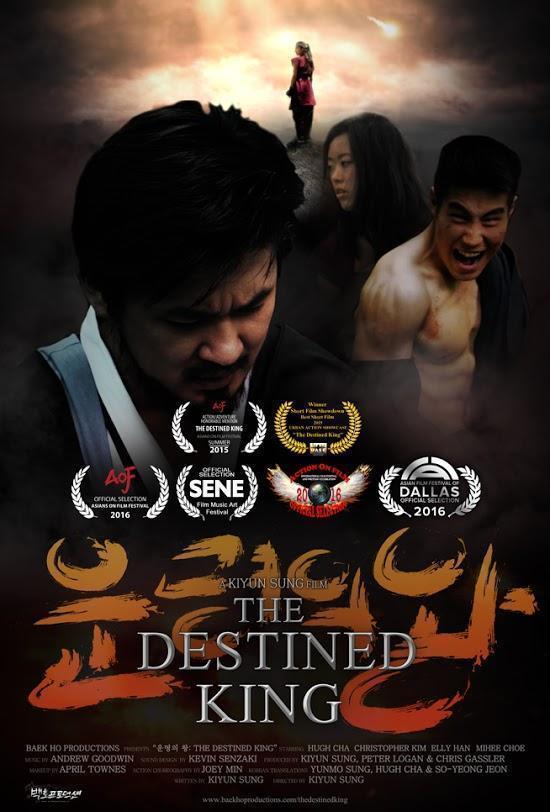 Now, it’s off to the action with up to three great test fight practice with India King kicking things off via her latest fight reel workshop treatment with actor, filmmaker and instructor Lohan Buson. Jay Hieron contines the playlist leading an action practice piece by action director Evan Taylor, followed by David Conk whose own Wolf Stunts crew now arise with the new short, Legend with Jonathan Mercedes.
And finally, we have four new shortfilm entries for this week’s playlist with nearly up to a full our of content. Fellow contributor, actor and filmmaker James Couche starts things off with his most recent release, Stray Bullet – a reworked action short cut from an unfinished project from 2009, here now with Couche as an assassin whose trist with a beautiful redhead off-sets a deadly confrontation with his employer’s spoiled nephew.
Next up is freerunner Omar Zaki who takes center stage this week opposite Kevin Sirivongxay in a spectacular new fan film attributed to Nickolodeon’s popular Avatar series, Battle For Republic City; Poorly acted? Yes, and say what you will about the casting, but Glass does a terrific job handling the scope of this project in terms of its stunning visual effects and Joseph Le’s fight choreography, making it all the more watchable and worthwhile.
Following that is a terrific new James Bond fan film crowdfunded last February with director Matthew Salanoa making his shortfilm debut. I Only Need One is the name, inspired by Guy Hamilton’s 1974 James Bond movie, The Man With The Golden Gun, and with a brilliantly-executed, spirited indie project with great sequences and a formula that let’s the espionage action speak for itself with aforementioned stunt reel subject Andrew J. Neis leading the cast.
Last and far from least is director and actor Fabricio Martin now out and about with his newest original martial arts fantasy drama hybrid, Warriors, which our own Joey Min had the opportunity to discuss the project in a recent review. Alejandro López Hiriart stars as an underground prize fighter forced to a moral conflict of interest. Seasoned actor Juan Carlos Puppo anchors the film in a role that services the character evolution here quite nicely, and all in the company of solid action sequences by our cast as well as co-stars Walter Gomez and Pablo Kun Castro, and with kinetic, high-energy fight sequences directed and edited by Martin himself.
Feast! And enjoy!

CLICK HERE for more awesome action, and if you if you have a top-notch shortfilm or demo reel you think deserves an audience, CLICK HERE and send it to us!