THIS GIRL IS BADASS Gets A North American Home Release Date 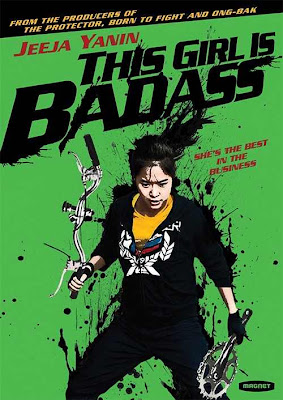 Thai action star and new mom Jeeja Yanin has scaled back a tiny bit in the department of large-scale highly dangerous stuntwork since her days of working on films like Chocolate and Raging Phoenix. That may all change when we see more of what Tom Yum Goong 2 has to offer when it is released later this year. But before then, fans of Thai cinema in North America will get to see the martial arts actress switch gears to the action comedy genre with Magnolia Entertainment’s DVD and Blu-Ray release of the 2011 Thai martial arts comedy, This Girl Is Badass on May 21, 2013.

The film stars Yanin with co-star and directed by Thai comedic actor and Ong Bak alumnus Petchtai Wongkamlao. The film also stars Atis Amornwetch, Jazz Chuancheun, Jim Chuancheun and Nui Chernyim. To learn more on how to order your copy, head over to Far East Films.

In ‘This Girl is Badass’, Jeeja takes her skills to the next level as a bike messenger who is hired by competing mob bosses to smuggle goods. Caught in the middle and given an ultimatum, the only way out is a confrontation erupting into a battle of bullets, face kicks and blows.

Click HERE if the embed below fails to load.

New Series Teaser For AGENTS OF S.H.I.E.L.D. HAMMER OF THE GODS Smashes U.S. Screens This Summer