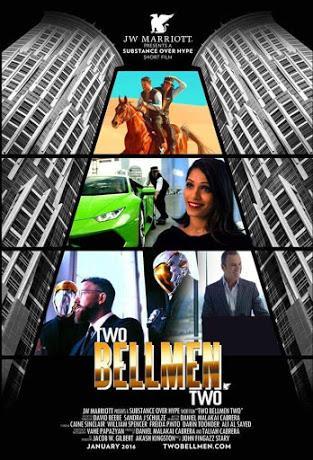 William Spencer and Caine Sinclair have their work cut out for them with the online premiere of the new short, Two Bellmen Two. The JW Marriot hotel chain sets the stage for our lead actors in the company of music and movement performance troupe, Substance Over Hype with stunt sequences staged by James Hutchison, and actress Frieda Pinto and actor Ali Al Sayed also starring.

The hotel chain has officially announced the shortfilm’s release with details below, and you would be wise to click here if you missed last year’s Two Bellemen.

The comedic, action-packed film was shot on location at JW Marriott Marquis Hotel Dubai, the world’s tallest hotel, and follows bellmen Gage and Christian, played by Hollywood actors and stuntmen William Spencer (Spider-Man; Spider-Man 2) and Caine Sinclaire (NBC’s Grimm; How I Met Your Mother) respectively, as they race through the streets of Dubai to rescue a confidential presentation for the beautiful businesswoman Leila, played by award-winning actress Freida Pinto (Slumdog Millionaire, Planet of the Apes, Trishna).

“The Marriott Content Studio is a safe place for the creative community, where we truly partner with creators to tell original stories that showcase our portfolio of 19 brands – positioning the hotels and destinations as characters themselves – ultimately inspiring viewers to travel,” said David Beebe, Vice President, Global Creative + Content Marketing for Marriott International. “Two Bellmen Two, and all of our content, is just one part of a much larger global marketing ecosystem and strategy that is focused on winning the hearts, minds, and wallets of the next generation traveler.”

The premiere events in Dubai and L.A. also featured show-stopping live entertainment including a parkour performance in Dubai and live graffiti installations of the iconic Dubai skyline in L.A. In Dubai, guests received personalized Arabic calligraffiti canvases written live by professional street artist Ashekman (a.k.a. Oman Kabbani). Guests at both premieres were treated to globally inspired cocktails and cuisine, live DJ entertainment and an intimate question and answer session with the film’s cast and crew.

“Two Bellmen Two is an entertaining, theatrical way to showcase JW Marriott’s commitment to world-class service through the eyes of our associates who work tirelessly to ensure an immersive, enriching experience the moment a guest walks through our doors,” said Mitzi Gaskins, Vice President, Luxury Brand Management at Marriott International. “Our stunning hotel and the city of Dubai – a hub for culture, commerce and luxury travel – are idyllic backdrops for this original short film.”