Watch The Dazzling New Trailer For THE DIVERGENT SERIES: ALLEGIANT! 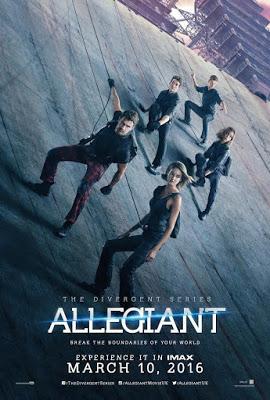 Director Robert Schwentke‘s latest now welcomes the first of a two-part finale in the wake of the sprawling, mind-bending cerebral adventure that is The Divergent Series. Allegiant, the third in the YA adapted film quadrilogy brings a tougher Shailene Woodley with leading man Theo James inspired by author Veronica Roth which once set off an epic journey of self-discovery amidst looming war and destriction among the five ruling factions in Chicago.
SYNOPSIS:

After the earth-shattering revelations of INSURGENT, Tris must escape with Four and go beyond the wall enclosing Chicago. For the first time ever, they will leave the only city and family they have ever known. Once outside, old discoveries are quickly rendered meaningless with the revelation of shocking new truths. Tris and Four must quickly decide who they can trust as a ruthless battle ignites beyond the walls of Chicago which threatens all of humanity. In order to survive, Tris will be forced to make impossible choices about courage, allegiance, sacrifice and love.

All else aside, the trailer looks visually outstanding and ambitious as well as the props being used…very sci-fi. This one looks great to catch when it opens March 10 before the release of Ascendant a year after.
Watch the trailer courtesy of Buzzfeed.

Get A Look At ZAMBO DENDE In An Epic Standoff In A New Set Photo And Now, A Word From Jackie Chan…